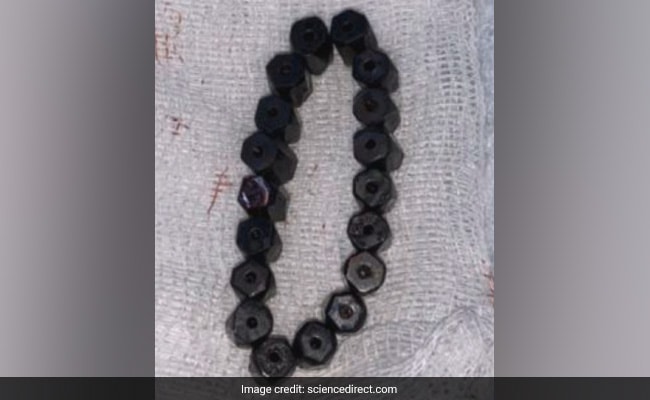 Children have problems with ingesting foreign objects like coins, magnets and small toys into their gastrointestinal tracts. In a similar case, a four-year-old boy swallowed multiple magnetic beads, Science Direct reported. The boy had been complaining of “colicky abdominal” pain for two days. Doctors were shocked to learn that the pain was actually being brought on by a magnetic bracelet that he had swallowed. He was taken to the hospital after “multiple episodes of vomiting and constipation.”

The case study is titled ‘Ingestion of multiple magnetic beads in a child’ in the “Journal Of Pediatric Surgery Case Reports.”

Doctors first determined after an examination that the boy had acute appendicitis and then they removed his appendix. Three days after the procedure, he began to vomit and his stomach ache continued. “The abdominal pain persisted post appendectomy. This was later associated with bilious vomiting which started on the 3rd post operative day,” the study said.

Two days later, his symptoms were still present, so doctors decided to perform an ultrasound to figure out what was wrong. It was then revealed that the kid had a bracelet in his stomach. It was is trapped inside the boy’s abdominal cavity.

“Parents could not give any history of foreign body ingestion. A diagnosis of intestinal obstruction due to impacted ingested foreign body was made and he had urgent laparotomy,” the study added.

Doctors performed an emergency laparotomy, an abdominal cavity incision procedure and removed the bracelet, which was made up of 18 magnetic beads in the pattern of hexagons, to stop further injury. The surgeons also patched up the boy’s intestinal wall’s holes.

The study mentions that as long a magnetic bead is tiny enough to pass through the digestive tract, it carries no additional risk. However, children are significantly more prone to mortality when they consume several magnets.

Centre Wants In On Judges’ Selection: Transparency Or Interference