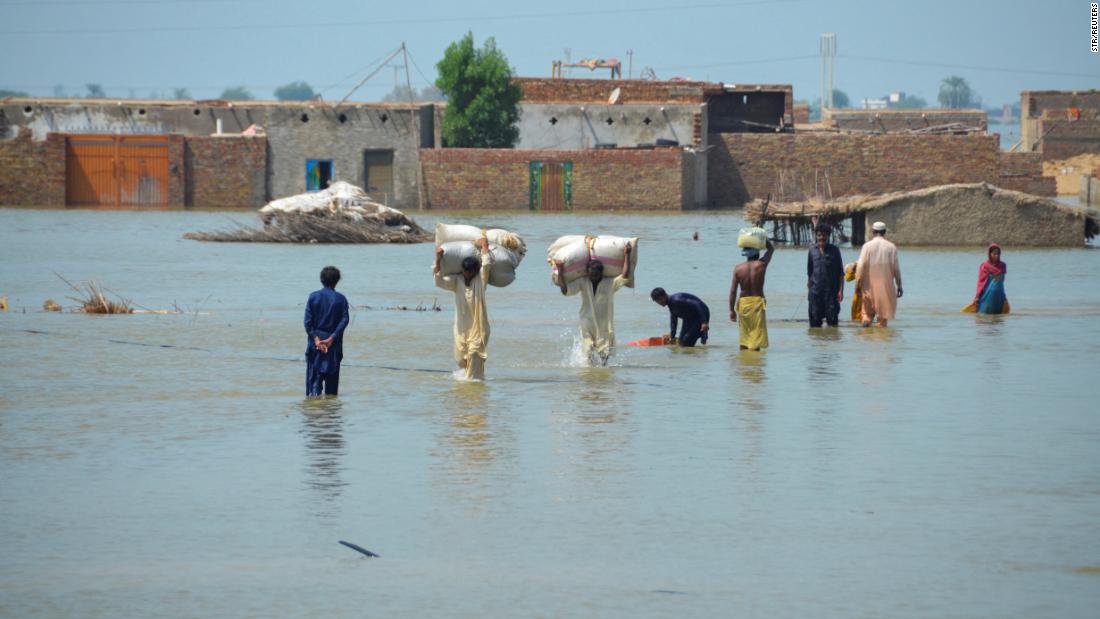 Food is in short supply after water covered millions of acres of crops and wiped out hundreds of thousands of livestock. Meanwhile, aid agencies have warned of an uptick in infectious diseases, leaving millions vulnerable to illness caused by what the United Nations has called a “monsoon on steroids.”

More than 1,100 people have died from the floods since mid-June, nearly 400 of them children, while millions have been displaced, according to Pakistan’s National Disaster Management Authority (NDMA).

Pakistan, which was already grappling with political and economic turmoil, has been thrown into the front line of the human-induced climate crisis.

Here’s what you need to know.

Why are the floods so bad?

Pakistan’s monsoon season usually brings heavy downpours, but this year’s has been the wettest since records began in 1961, according to the Pakistan Meteorological Department

Torrential monsoon rainfall — 10 times heavier than usual — has caused the Indus River to overflow, effectively creating a long lake, tens of kilometers wide, according to images from the ESA on August 30.

In the southern Sindh and Balochistan provinces, rainfall has been 500% above average as of August 30, according to the NDMA, engulfing entire villages and farmland, razing buildings and wiping out crops.

Pakistan is responsible for less than 1% of the world’s planet-warming gases, European Union data shows, yet it is the eighth most vulnerable nation to the climate crisis, according to the Global Climate Risk Index.

“South Asia is one of the world’s global climate crisis hotspots. People living in these hotspots are 15 times more likely to die from climate impacts,” Guterres said on August 30.

“As we continue to see more and more extreme weather events around the world, it is outrageous that climate action is being put on the back burner as global emissions of greenhouse gases are still rising, putting all of us — everywhere — in growing danger,” he added.

Pakistan is also home to more glaciers than anywhere outside the polar regions. But as the climate warms, it’s becoming more vulnerable to sudden outbursts of melting glacier water.

What has been the damage so far?

Pakistan’s Prime Minister Shehbaz Sharif said on August 30 the floods were “the worst in the country’s history” and estimated the calamity had caused more than $10 billion in damages to infrastructure, homes and farms.

Floods have impacted 2 million acres of crops and killed more than 794,000 heads of livestock across Pakistan, according to a situation report from the UN Office for the Coordination of Humanitarian Affairs on August 26.

More than 800 health facilities have been damaged in the country, of which 180 are completely damaged, leaving millions of people lacking access to health care and medical treatment, as reported in many affected districts, according to the World Health Organization (WHO).

How is it impacting people in Pakistan?

Pakistan is facing twin food and health crises brought by the unprecedented floods.

According to charity Action Against Hunger, 27 million people in the country did not have access to enough food prior the floods, and now the risk of widespread hunger is even more imminent.

“Our priority right now is to help save and protect lives as waters continue to rise. The scale of these floods has caused a shocking level of destruction — crops have been swept away and livestock killed across huge swathes of the country, which means hunger will follow,” said Saleh Saeed, chief executive of the Disasters Emergency Committee, a United Kingdom-based aid coalition.

Prime Minister Sharif said on August 30 that people were facing food shortages and the price of basic items such as tomatoes and onions had “skyrocketed.”

“I have to feed my people. Their stomachs cannot go empty,” Sharif said.

The WHO has also classified Pakistan’s worst floods on record as an emergency of “the highest level,” warning of a rapid spread of disease due to the lack of access to medical assistance.

WHO chief Tedros Adhanom Ghebreyesus on August 31 warned of new outbreaks of diarrheal diseases, skin infections, respiratory tract infections, malaria and dengue in the aftermath of the floods, while a litany of waterborne diseases also posed health risks.

What is being done?

A National Flood Response and Coordination Center has been set up as the country reels from the flooding, according to Pakistan’s Prime Minister.

The United Nations has launched a $160 million appeal aiming to reach 5.2 million of the most vulnerable people in the country, while the WHO also released $10 million to treat the injured, deliver supplies to health facilities, and prevent the spread of infectious diseases.

Two Chinese military planes carrying tents and other flood aid landed in Karachi on August 30, according to the Consul General of China to Karachi. China has pledged $14.5 million in aid to Pakistan, while the UK government also announced a contribution of 1.5 million pounds ($1.73 million) for relief efforts.

Prime Minister Sharif told CNN on August 30 the country was in talks with Moscow over importing wheat without breaching Western sanctions imposed over Russia’s invasion of Ukraine.

Sharif said that while Pakistan had secured 1 million metric tons of wheat amid the global shortage, the country will now need more due to the impact of the floods on the agriculture sector — which accounts for almost 40% of employment, according to World Bank data.