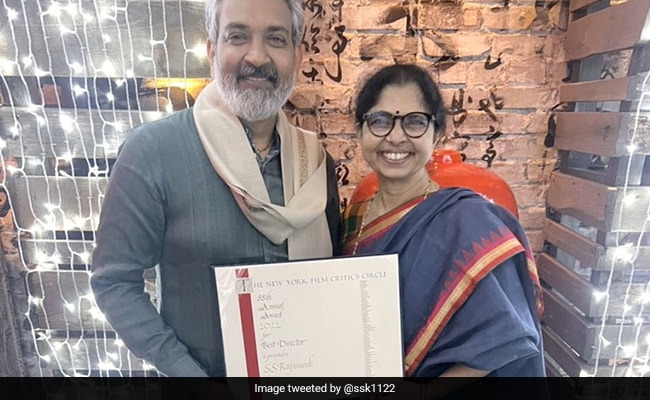 New Delhi: Ram Charan congratulated RRR director SS Rajamouli on his big win at the New York Film Critics Circle. SS Rajamouli won the Best Director trophy for RRR. Ram Charan reacted to the tweet shared by the filmmaker’s son SS Karthikeya and he wrote: “And to many more such awards. Congratulations SS Rajamouli Garu.” Meanwhile, SS Rajamouli’s acceptance speech from the award ceremony went viral. “Receiving this award from you is a great honour. I really appreciate it. You have honoured my whole cast and crew and have made a lot of people take notice of a small film from the south of India. Many people don’t know that such a field exists but because of this, now I am sure many people will look at it,” the filmmaker said during the ceremony.

And to many more such awards !!
Congratulations @ssrajamouli Garu https://t.co/uUNqar5Cxc

RRR song Nattu Nattu has also made it to the Oscars shortlist for the Best Original Song Category. The nominations for the 95th Academy Awards will be announced on January 24. RRR released across the globe in Hindi, Tamil, Telugu and Malayalam, has submitted itself for consideration in various Oscar categories.

Holiday Done, Shahid Kapoor And Mira Rajput Are Back In Mumbai