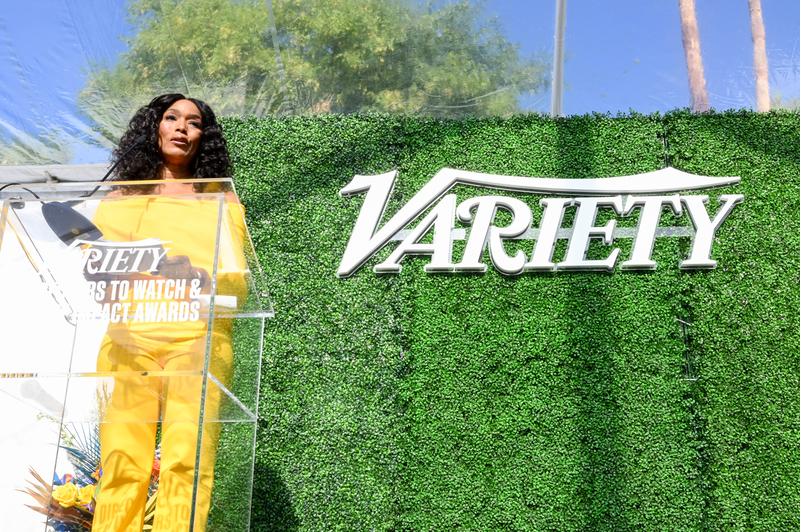 In honor of this year’s event, the actress donned a yellow jumpsuit with a ruched capelet detailing at the bodice from Greta Constantine. She complemented the look with a gold clutch bag from Rodo. She finished her ensemble by accessorizing with jewelry from Fernando Jorge, including earrings and a bracelet.

To create her look for the awards, Bassett worked with stylist Jennifer Austin, who regularly works with the actress, having dressed her in brands such as Giambattista Valli, Valentino and Moschino.

For makeup, Bassett worked with D’Andre Michael, who gave the actress an elevated natural look with a honey-brown lip, blush to accent her cheeks and earth-tone eye shadow. For hair, Bassett worked with Randy Stodghill, who parted her hair down the center and gave her a wavy style.

At the event Bassett received the award for Creative Impact in Acting for her role in Ryan Coogler’s “Black Panther: Wakanda Forever,” the sequel to the box office hit “Black Panther.” Bassett reprised her role as Queen Ramonda in the sequel, receiving critical acclaim for her performance. She is a nominee for this year’s Golden Globe Award for Best Supporting Actress in a Motion Picture for her role in the film.

Bassett has been making her rounds promoting the film, joining her costars Letitia Wright, Danai Gurira and Lupita Nyong’o for the promotional tour.