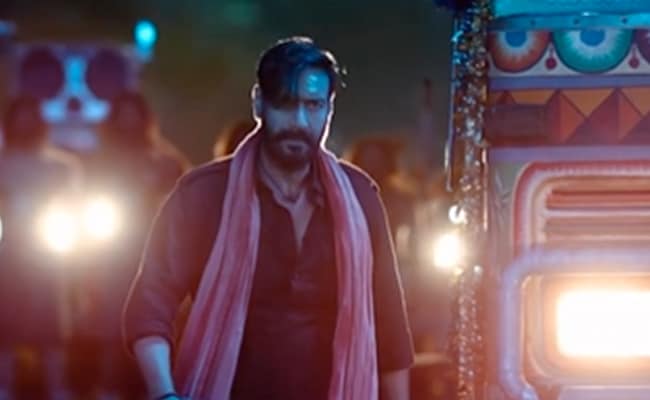 A still from the video. (courtesy: ajaydevgn)

Ajay Devgn has released the second teaser of his much-awaited film Bholaa, co-starring Tabu. Helmed by the veteran actor, the teaser offers a sneak peek into the high-octane action sequence. The over-one-minute-long video starts with Ajay Devgn’s power-packed dialogue, “Jo baap 10 saal mai ek gudiya nahi de paya, voh baap ek raat mai duniya dene ki soch raha hai. (A father who was unable to gift a doll is planning to sort everything in one night.” In the teaser, the actor dons an all-black ensemble and white powder on his forehead. The teaser also introduces Tabu (a police officer), being dragged by what appear to be goons.

In the following few scenes, we can see Ajay Devgn fighting what appear to be goons. He can be seen performing some high-octane stunts on a bike and truck. It seems Ajay is Shiva bhakt in the movie, as there is a scene where he is doing jala abhishek (pouring water on a shivling). Also, he can be seen fighting with Lord Shiva’s weapon Trishula. Throughout the teaser, we can hear the remix version of the song Aaj Phir Jeene Ki Tamanna Hai.

After seeing the second teaser it seems the trailer will be worth waiting. Sharing the teaser on his Instagram handle, the actor wrote, “Jab ek chattaan, sau shaitaanon se takrayega… (When one rock collides with hundred devils…).

Bholaa is the Hindi remake of the 2019 Tamil film Kaithi, starring Karthi in the lead. Produced by Ajay Devgn Ffilms, Reliance Entertainment, T-Seies Film and Dream Warrior Pictures, the Hindi version will mark the cameo of Abhishek Bachchan and Amala Paul.