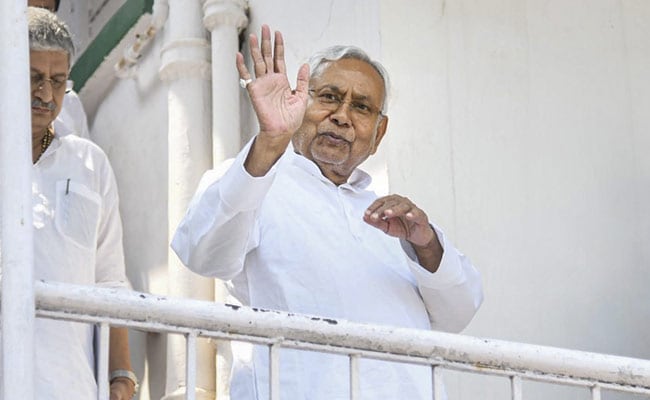 Five of JD(U)’s six MLAs in Manipur joined the ruling BJP on Friday.

New Delhi: Bihar Chief Minister Nitish Kumar today said the BJP “will come down to 50 seats” in the 2024 elections “if all Opposition parties fight together”. “I am working for that,” said Mr Kumar, whose likely national role is driving political conversations ever since he dumped the BJP last month to form a new government with old allies, Tejashwi Yadav’s RJD and the Congress. He has so far skirted questions about his ambitions.

His latest call for Opposition unity came in his speech at his party JDU’s state executive meeting in Patna. Speaking to reporters earlier, he confirmed he’ll be visiting Delhi in the next few days to meet with top leaders and explore the prospects of opposition unity. He did not share any details.

He was speaking a day after five of six JDU MLAs in Manipur joined the ruling BJP, at which the former partners got into another round of rhetoric.

JDU President Rajiv Ranjan Singh ‘Lallan’ then hit back, asking Sushil Modi not to “daydream”. He also accused the BJP of not adhering to “coalition dharma” in Arunachal Pradesh, where all seven JDU MLAs merged with the ruling party even when they were allies in the NDA.

“Want to remind you that both in Arunachal and Manipur, JDU won seats by defeating BJP… Was what happened in Arunachal Pradesh because of your adherence to the alliance commitment?” he tweeted in Hindi.

Speaking to reporters, Mr Singh said the Centre’s actions in Opposition-ruled states like Maharashtra, Madhya Pradesh, Delhi, and Jharkhand showed the BJP’s “fear and desperation” ahead of the 2024 Lok Sabha polls. Asked if it could happen in Bihar as well, he said there’s politics in every vein of the state and nothing would happen here.

He also claimed what happened in Manipur was due to “money power”.

Nitish Kumar said all the six Manipur MLAs had visited him in Bihar and expressed happiness over the JDU ditching the BJP-led NDA. “Just imagine what’s happening. How they are breaking off MLAs who won from other parties,” he said, talking to reporters at the party office in Patna.

In a call for a united front against the BJP, he said, “If all Opposition parties join forces, the people’s mandate will be very good.”

As for the JDU’s fate in Manipur, since five of its six MLAs joined the BJP — more than two thirds — their crossing over was considered valid. In Arunachal Pradesh, six of seven JDU legislators had joined the BJP in 2020; and its lone remaining MLA did so last week.