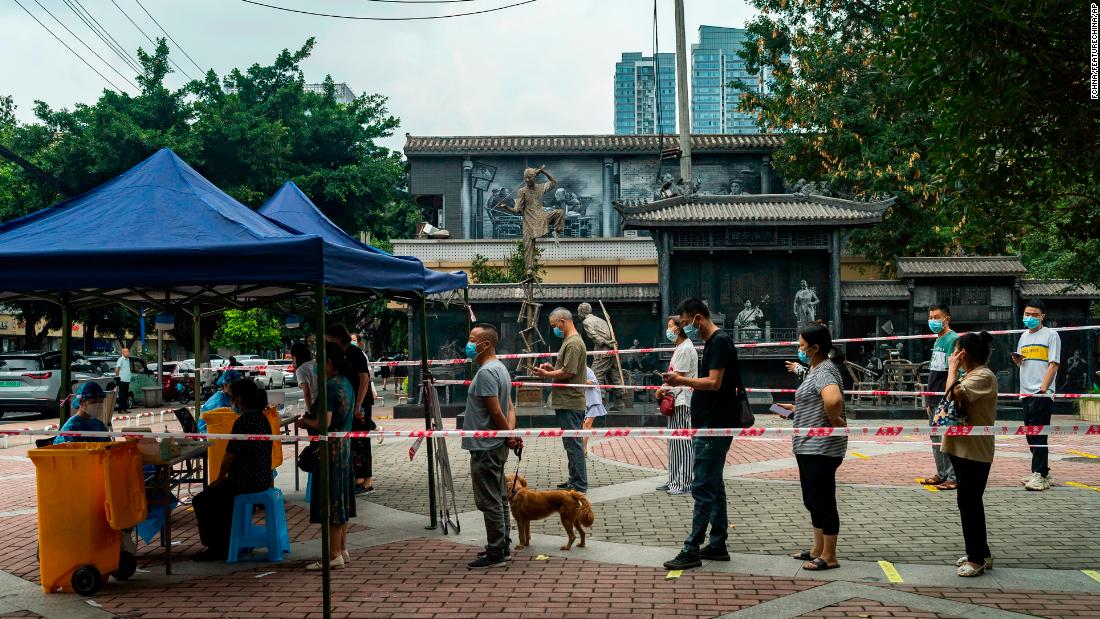 The move offered a stark reminder of the lengths the country is prepared to go to in sticking to the zero-tolerance approach favored by leader Xi Jinping, with the shutting down of the megacity following the reporting of more than 700 cases the previous week.

And it came despite earlier efforts by authorities to quash rumours that such a lockdown was coming, with police arresting one resident who was accused of making “provocative comments” on social media.

The lockdown requires all residents to stay at home from 6 p.m. Thursday, except for mandatory Covid testing. Mass testing will take place from Thursday to Sunday, the city government said.

Households can send one person out for grocery shopping once per day with a negative test, and residents with emergency requests such as seeking medical care must gain approval from a neighborhood committee.

All businesses are to be shut except for supermarkets, pharmacies and hospitals. Restaurant dining is also being suspended, with only takeaways allowed.
This is China’s largest city-wide lockdown since Shanghai, the financial hub of 25 million people, emerged from a painful two-month lockdown in June.

Shanghai was reporting thousands of infections per day in late March as it headed into the lockdown. On Wednesday, Chengdu reported just 156 cases.

Chengdu’s lockdown, announced hours before it went into force, sparked panic buying across the city. Photos circulating on social media show markets packed with crowds, car trunks and backseats filled with groceries — and a dozen chicken strapped onto the roof of a car.

The panic buying followed similar scenes earlier in the week following speculation on social media that authorities were considering a lockdown.

On Monday, a Chengdu resident with the handle “Tropical Forest” on WeChat, China’s popular messaging app, said in a group chat that authorities would discuss whether to impose a lockdown in an evening meeting. Screenshots of his messages were leaked and went viral on social media, sending residents to snap up groceries and daily necessities at supermarkets.

On Tuesday, Chengdu police said the WeChat user, surnamed She, had caused panic among citizens and disrupted epidemic prevention work by posting “provocative comments”. She was detained for 15 days and fined 1,000 yuan for “picking quarrels and provoking trouble.”

Doubling down on zero-Covid

China is one of the last places in the world still enforcing stringent zero-Covid measures, which rely on sweeping digital surveillance, mass testing, extensive quarantines and snap lockdowns.

The strategy has faced growing challenges from the highly infectious Omicron variant, with authorities across China struggling to tamp down on outbreaks. In the past 10 days, new local cases have been recorded in all of mainland China’s 31 provinces and regions.

In the southern technology hub of Shenzhen, authorities shut down Huaqiangbei, the world’s largest electronics market, this week as they locked down dozens of neighborhoods and suspended service at 24 subway stations and hundreds of bus stations across the city.

In the northern port city of Dalian, a lockdown was imposed on Thursday and set to run until Sunday in its main urban areas, affecting about 3 million residents.

In Shijiazhuang, the capital of Hebei province in northern China, authorities suspended public transport across the city over the weekend, after 30 infections were found during mass testing. Four districts ordered more than 3 million residents to work from home until Wednesday afternoon.

In western China, Xining, the capital of Qinghai province and home to 2.5 million people, ordered a lockdown from Monday until Thursday in its urban areas and suspended public transport.

The rolling lockdowns have crippled economic growth. In July, youth unemployment in China hit a record high, with one in five young people out of work.

While initially supportive of the zero-tolerance approach, the Chinese public has become increasingly frustrated with the unending restrictions on their daily life. The often ruthless and chaotic enforcement of the policy by local governments has further fueled public anger and resentment.

Despite the economic and social toll, Chinese leaders have repeatedly vowed to stick to the zero-Covid policy, insisting that it is saving lives. Health officials say the relatively low vaccination rate among China’s elderly population and inadequate rural healthcare capacity are hurdles to abandoning zero Covid.

Local authorities across China are under tremendous pressure to prevent outbreaks from spiraling just weeks away from a key Communist Party meeting. Maintaining social stability has always been a top priority in the lead-up to important political events.

The 20th Party Congress, scheduled to start on October 16, is widely expected to see Chinese leader Xi Jinping extend his hold on power for another five years.

Some Chinese who have grown disillusioned with zero-Covid hope restrictions could be relaxed after the congress, but the government has not offered any timeline on a possible shift of the policy.