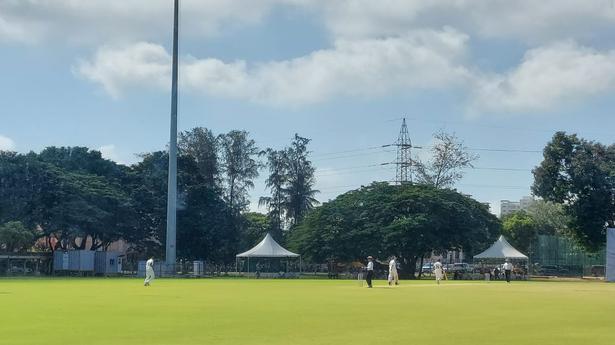 Welcome to Sportstar’s coverage of the Duleep Trophy final in SNR College Cricket Ground in Coimbatore. This is Abhishek Saini and Santadeep Dey, bringing you all the updates.

Rahane’s left guessing as Stephen hits the hard length and gets the ball to move away from the West Zone skipper.

WZ 1/1 after 2 overs: Caught behind! Short of a length delivery from CV Stephen that seams back in to find the inside edge of Jaiswal. The left-handed batter is in utter disbelief. There’s no DRS but replays suggest there had been some contact between bat and ball.

WZ 1/0 after 1 over: There’s quite a bit of bounce and the ball’s seaming away from Yashasvi Jaiswal. Three slips and a gully in place for Priyank Panchal as well. Basil Thampi has really got things rolling for South Zone.

We wanted to bowl. If we can use the moisture and take early wickets, we’ll be ahead. The tracks have been flat. One change. Stephen comes in.

We’ll look to bat. We know how the wicket will behave as we played the last game here. There’s grass cover here and a little bit of moisture. I am happy the full domestic season is back again. Three changes for us (Jaffer, Prithvi and Tripathi out).

The pitch looks good. Not much moisture. It is firm. There’s an even covering of grass. The colour of grass isn’t too green.

In a fitting finale to the Duleep Trophy,  which kickstarts India’s domestic cricket season, 18-time champion West Zone will take on 13-time winner South Zone at the SNR College Cricket Ground in Coimbatore from Wednesday.

While West Zone will be familiar with the conditions, having beaten defending champion Central Zone by 279 runs in the semifinal at the same venue, South Zone will have momentum on its side as it rides the crest of a 645-run drubbing of North Zone – the second-highest margin of victory by runs in Indian First-Class cricket.

“The team has done well in the last match but final is a fresh start. We have not played in this venue before. We want to assess the conditions quickly. We are playing against a good side,” South Zone skipper Hanuma Vihari  said on Tuesday.

With the addition of Shreyas Iyer, Sarfaraz Khan and Priyank Panchal to the squad ahead of the final, West Zone will hope to tide over the absence of Prithvi Shaw – Player-of-the-Match in the semifinal – and Rahul Tripathi, who were selected for the India A one-day series against New Zealand A.

Panchal – who led India A in the three unofficial Tests against the Kiwis – is likely to open alongside Yashasvi Jaiswal while Shreyas and Sarfaraz will strengthen the middle-order. All three additions to the squad had a few hits in the nets on Tuesday.

Shreyas, we know, he has been doing really well in white-ball cricket and Test matches. Really happy to have all of them,” West Zone captain Ajinkya Rahane  said ahead of the match.

The skipper himself will be keen to find consistency.

After scoring an unbeaten double-hundred against Northeast Zone in the quarterfinal, Rahane had a lean outing against Central Zone, registering scores of 8 and 12 and getting dismissed in similar fashion on both occasions – leaving the ball outside off-stump.

Meanwhile, South Zone is unlikely to tinker with its batting after its batters put up scores of 630 and 316 in the two innings of the semifinals.

The Vihari-led side will hope for Kerala prodigy Rohan Kunnummal to continue his rich vein of form and India international Mayank Agarwal to convert the starts into big scores at the top of the order.

The middle-order also looks settled for South, with Vihari, Ravi Teja and Ricky Bhui notching up hundreds against North. While Devdutt Padikkal – who was not picked in the for the semifinal – had an extensive net session on Tuesday, it is doubtful he’ll make it to the playing XI.

Shams Mulani and R Sai Kishore will shoulder the spin-bowling responsibilities for their teams. Mulani picked a fifer and scored valuable runs lower down the order for West Zone in the semifinal while Kishore registered career-best figures 10 for 98 to skittle North Zone.

Both left-arm spinners will relish bowling to line-ups packed with right-handers.

Tanush Kotian and Krishnappa Gowtham scalped key wickets and were more than decent with the bat in the semis, and will lend much-needed flexibility and depth on a pitch that could see sides lose early wickets.

West Zone quicks Chetan Sakariya and Chirag Jani rolled their arm over in the nets on the eve of the match and Chintan Gaja or Atit Sheth could make way for one of them, with veteran pacer Jaydev Unadkat leading the attack.

There was a hint of green on the pitch for the pacers to exploit and South Zone could pick CV Stephen alongside Basil Thampi – who was the lone specialist fast-bowler against North Zone.

The wicket for the semifinal in Coimbatore was sporting, with appreciable bounce, movement, turn and value for positive stroke-play and expect no less in what should be an even contest between bat and ball.

Here is Wednesday with W.V.’s latest episode where he talks about India’s domestic cricket season: