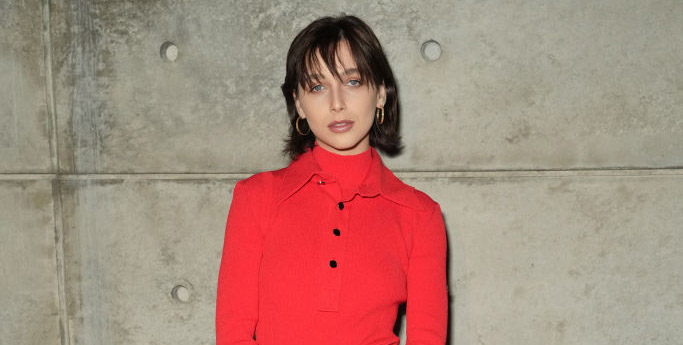 Emma Chamberlain arrived at W Magazine and Louis Vuitton’s awards season dinner on Friday giving a lesson on how to do a pop of color.

For the event, the YouTube star and social media personality wore a long-sleeve red polo shirt with a red turtleneck top underneath, a black miniskirt paired with a black belt with a statement buckle, black platform boots and a black monogram top-handle bag, all from Louis Vuitton. She accessorized with statement hoop earrings, a bracelet and a ring.

Chamberlain has a long-standing relationship with Louis Vuitton. In fall 2021, she made her Met Gala debut wearing a gold dress from the brand. In March 2022, she attended the brand’s fall 2022 show during Paris Fashion Week.

For makeup, Chamberlain went for an understated look with a nude lip, eye-popping mascara and smoky eye shadow. For hair, she went for bangs in the front and a coiffed style in the back.

In addition to her work with Louis Vuitton, Chamberlain appeared in Levi’s campaign for the brand’s Gold Tab collection last year. The collection included sweats, sweatshirts, tanks and other basics.

“As much as I love playing dress-up in interesting clothing pieces, I love being comfortable equally as much,” Chamberlain told WWD regarding the campaign and the product offerings.

When she’s not busy with her fashion endeavors, Chamberlain also runs her eponymous coffee brand. In July 2022, Chamberlain Coffee introduced its artist coffee series, where Chamberlain selects a different artist each month to design the packaging for its Original Family Blend coffee. For this month, artwork by Nuria Díaz is featured.

W and Louis Vuitton’s dinner was hosted by W editor-in-chief Sara Moonves and Louis Vuitton artistic director Nicolas Ghesquière. The dinner brought together stars from the worlds of film and television, many of whom are nominees and front runners for Tuesday night’s Golden Globe Awards and the upcoming Academy Award nominations.