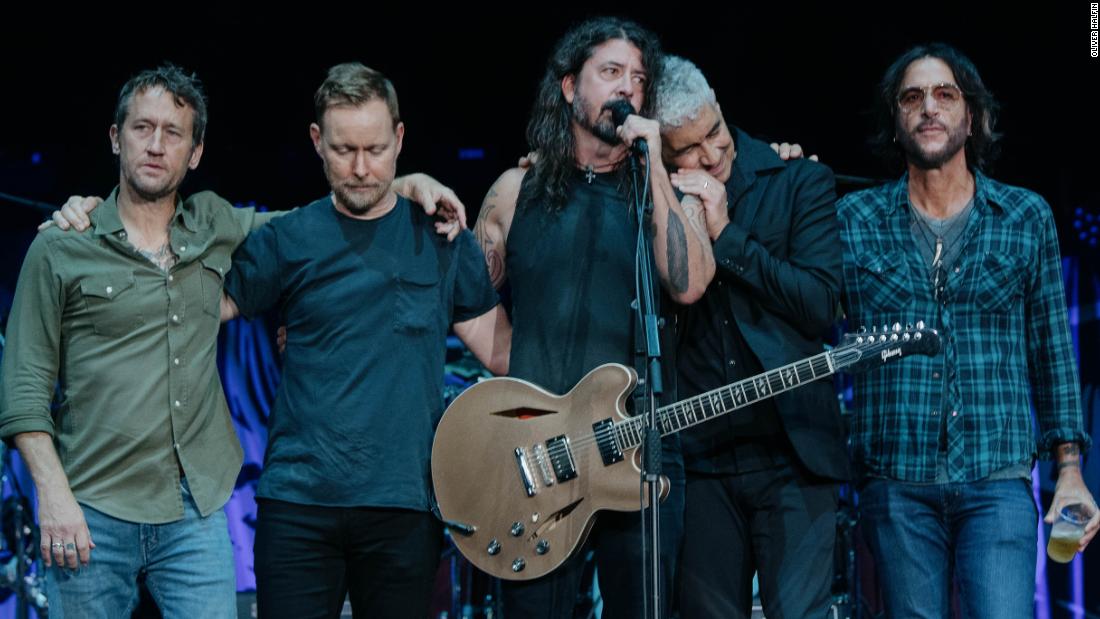 Hawkins, 50, died in March in Bogotá, Colombia, hours before the Foo Fighters were set to take the stage at the Festival Estereo Picnic. The band immediately canceled its remaining tour dates.

Saturday’s concert was the first time the band had performed together since Hawkins’ death.

According to the UK’s PA Media news agency, a tearful Foo Fighters frontman Dave Grohl told the crowd at London’s Wembley Stadium: “Taylor loved to jam and record with anybody and everybody. He loved to play music every day. And there aren’t too many people that he’s never jammed with. So this collection of friends and family and musicians, this is all brought together by him and we’re all connected here today by that one guy.”

The theme of family was ever-present throughout the show. Sixteen-year-old Oliver Shane Hawkins joined his father’s band for a powerful rendition of Foo Fighters song “My Hero.”

“Ladies and gentlemen, we have one more drummer that’s going to come up and play with us,” Grohl said as he welcomed Hawkins’ son to the stage. “And let me tell you I don’t think I’ve ever seen anyone hit the drums as hard as this person, but beyond that, he’s a member of our family. And he needs to be here tonight with all of us, and I think it makes sense that he’s going to come up and play with us tonight.”

In a pre-recorded message, Elton John called Hawkins “an incredible drummer” and recalled him “playing on my last album, which I was so thrilled about and honored.”

“Tonight is about remembering him, honoring him and don’t ever forget him,” John added, according to PA.

Comedians Dave Chappelle and Jason Sudeikis also took to the stage to tell anecdotes about their relationship to Hawkins’ music.

Concertgoers described the “incredible” atmosphere at the gig, telling CNN, everyone was there to honor Hawkins and “it couldn’t have been better.”

“With it being the first gig since he passed, it was really emotional, really raw,” said Carolina Madeira. “Dave [Grohl] almost broke down, and the atmosphere was just unbelievable, people were cheering him, trying to help him keep singing. I was crying like a baby… everyone was breaking down in tears.”

The 35-year-old said she didn’t know where Hawkins’ son got the strength to perform, adding: “He was so good at the drums, and you can see the connection with the band was real, you can see the energy from him. It’s a tough thing to do, especially at 16, he was incredible.”

Saturday’s concert was the first of two celebratory events honoring Hawkins. A second tribute concert will be held on September 27 in Los Angeles. Funds from the events will go to the Music Support and MusiCares charities, both of which were chosen by the Hawkins family.

Hawkins joined Foo Fighters in 1997, first appearing with the band on the tour supporting their sophomore album, “The Colour and the Shape.”