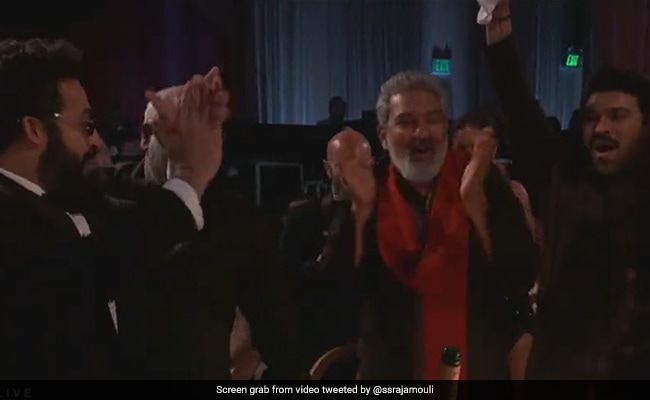 New Delhi: It’s a big day, not just for team RRR but for the Indian film industry as well. The smash hit Naatu Naatu from SS Rajamouli’s RRR won the Best Song at the 80th Golden Globe Awards in Los Angeles. Sharing the iconic moment when Naatu Naatu won the Golden Globe, SS Rajamouli wrote in his tweet: “Speechless. Music truly knows no boundaries.” SS Rajamouli referred to Naatu Naatu composer MM Keeravaani as “peddanna” (big brother) in his tweet and added, “Congratulations and thank you PEDDANNA for giving me Naatu Naatu. This one is special.” The filmmaker added, “I thank each and every fan across the globe for shaking their leg and making it popular ever since the release #GoldenGlobes.”

Congratulations & thank you PEDDANNA for giving me #NaatuNaatu. This one is special.:)

I thank each & every fan across the globe for shaking their leg & making it popular ever since the release#GoldenGlobespic.twitter.com/cMnnzYEjrV

At the 80th Golden Globe Awards, RRR was also nominated in the Best Non-English Language Film category, which was won by Argentina’s Argentina, 1985.

RRR, set in the 1920’s, is a fictitious story based on two legendary freedom fighters – Alluri Seetharamaraju and Komaram Bheem. It boasts of an impressive cast which includes Ram Charan, Jr NTR in the lead roles and Alia Bhatt, Ajay Devgn, Olivia Morris, Samuthirakani, Alison Doody, Ray Stevenson in supporting roles. The film opened to an overwhelming response from the audience, both in India and across the globe.

RRR was SS Rajamouli’s first project after the 2017 blockbuster Baahubali 2: The Conclusion, which was a massive success as well. The film released across the globe in Hindi, Tamil, Telugu and Malayalam simultaneously. RRR has submitted itself for consideration in several Oscar categories and features on a list of 301 films that are eligible for the awards.