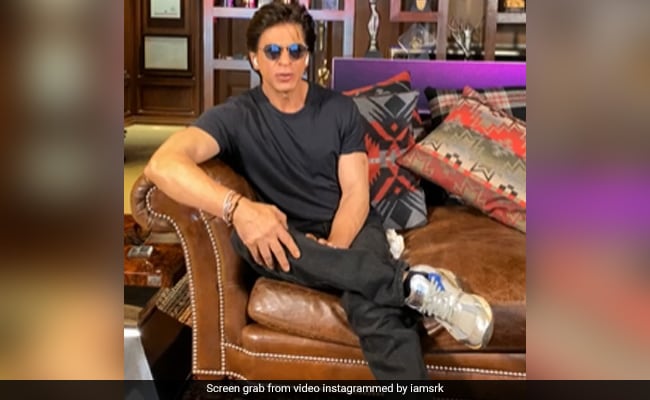 Shah Rukh Khan in a still from the video. (courtesy: iamsrk)

New Delhi: RRR fever has taken over after the film won Best Original Song for Naatu Naatu at the Golden Globe Awards. Shah Rukh Khan, just like every RRR fan out there, began the day in the only way possible – dancing to Naatu Naatu. Replying to RRR director SS Rajamouli’s tweet about the trailer of SRK’s new film Pathaan, the superstar wrote: “Sir just woke up and started dancing to Naatu Naatu celebrating your win at Golden Globes. Here’s to many more awards and making India so proud.” SRK’s tweet came in response to SS Rajamouli’s Pathaan appreciation that read: “The trailer looks fab. The King returns! Lots of Shah Rukh Khan. All the best to the entire team of Pathaan.” Rajamouli and RRR stars Jr NTR and Ram Charan are in Los Angeles for the Golden Globes.

Sir just woke up and started dancing to Naatu Naatu celebrating your win at Golden Globes. Here’s to many more awards & making India so proud!! https://t.co/Xjv9V900Xo

On Tuesday, RRR star Ram Charan gave a shout out to Pathaan trailer, all the way from LA. SRK replied to the tweet with these words: “Thank you so much my Mega Power Star Ram Charan. When your RRR team brings Oscar to India, please let me touch it.(Mee RRR team Oscar ni intiki tecchinappudu okkasaari nannu daanini touch cheyyanivvandi). Love you.”

At the 80th Golden Globe Awards, RRR was nominated in two categories – Best Song for Naatu Naatu ( which it won) and Best Non-English Language Film, which was won by Argentina’s Argentina, 1985.

Meanwhile, RRR has submitted itself for consideration in several Oscar categories and features on a list of 301 films that are eligible for the awards. Nominations for the Oscars will be announced on January 24.