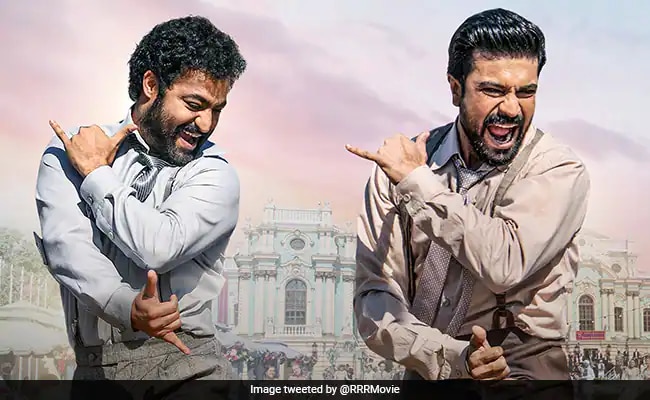 New Delhi: RRR came, saw and conquered at the Golden Globes. SS Rajamouli’s blockbuster has won Best Original Song for the infectious and globally viral Naatu Naatu, among Hollywood’s biggest awards. Other nominees in the category were Taylor Swift’s Carolina from Where The Crawdads Sing, Ciao Papa from Guillermo del Toro’s Pinocchio, Lady Gaga’s Hold My Hand from Top Gun: Maverick and Lift Me Up from Black Panther: Wakanda Forever. RRR is also competing in a second category at the Golden Globes – Best Non-English Language Film.

RRR is being represented at the Golden Globes by its director and stars – SS Rajamouli, Jr NTR and Ram Charan who is accompanied by wife Upasana Kamineni. Jr NTR and Ram Charan play freedom fighters Komaram Bheem and Alluri Seetharamaraju in the period drama, set in the British-occupied India of the 1920s. The cast includes Alia Bhatt and Ajay Devgn as well as British actors Ray Stevenson, Alison Doody and Olivia Morris.

RRR, which made over Rs 1,200 crore globally, has already won a slew of international honours including Best Director for Rajamouli at the New York Film Critics Circle awards. RRR has submitted itself for consideration in various Oscar categories as well and is expected to be nominated in at least one category if not more.

The Golden Globes are being held in Los Angeles with comedian Jerrod Carmichael as host. The awards return to the Hollywood mainstream after making internal reforms following criticism of its allegedly racist and sexist voting practices. Last year’s Golden Globes were boycotted by NBC, which broadcasts the show, and many of Hollywood’s big stars led by Tom Cruise who returned his three Globes.