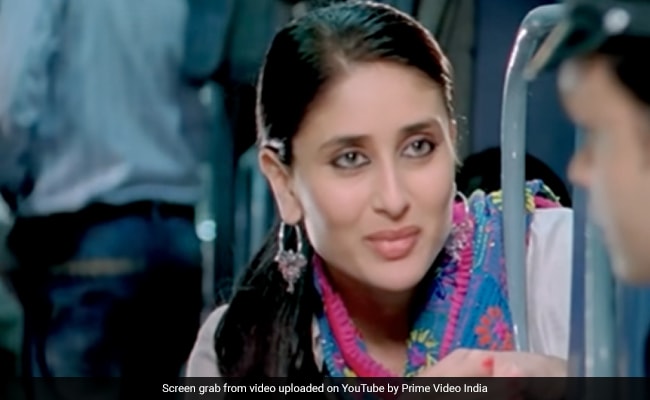 Kareena Kapoor in a still from Jab We Met. (courtesy: YouTube)

It is Kareena Kapoor’s birthday. The actress turns 42 today. Kareena aka everyone’s favourite “Poo” is a bonafide Bollywood star. Be it her on-screen charisma or the pout game, we love everything about her. She has been an inspiration to many. From blonde hair in Aitraaz to starting the zero-figure trend, Kareena has done it all with the utmost oomph. Over the years, she has delivered big hits such as Jab We Met, Bajrangi Bhaijaan, and 3 Idiots. Kareena Kapoor made her Bollywood debut with JP Dutta’s 2000 film Refugee and went on to star in family entertainers such as Mujhe Kucch Kehna Hai, Yaadein…, Ajnabee, Kabhi Khushi Kabhie Gham… and Main Prem Ki Diwani Hoon. Today, to celebrate her birthday, we have curated a list of the top five movies that you can binge-watch this weekend.

Kareena Kapoor and Shahid Kapoor’s 2007 film is an all-time favourite of cinephiles. It stars her as a happy-go-lucky woman named Geet Kaur Dhillon from Punjab, who changes the life of a depressed and rich businessman (played by Shahid) after their impromptu meeting on a train. The film is written and directed by Imtiaz Ali.

The Sudhir Mishra directorial was Kareena Kapoor’s breakthrough film, in which she starred as a prostitute. Three years after making her debut in Bollywood, Kareena signed up to portray Anant Balani’s story of a sex worker named Chameli onscreen and she did nail it. The small-budget and critically acclaimed film shows the interaction between an investment banker (played by Rahul Bose) and Chameli on a single night after his car breaks down in the red light district.

3 Idiots became a massive success after it opened in theatres in December 2009. Starring Aamir Khan, R Madhavan and Sharman Joshi alongside Kareena Kapoor and Boman Irani, the film is based on Chetan Bhagat’s novel Five Point Someone. It shows two engineering students trying to reconnect with their batchmate and best friend many years after their graduation while reminiscing their hostel days. Kareena played the role of a doctor and Aamir Khan’s love interest in this Rajkumar Hirani film.

“Kaun hai yeh? Jisne dubaara mudke mujhe nahin dekha?” We couldn’t help but start with this dialogue. After all, it is our Poo’s birthday guys. It features the actress as Pooja aka Poo alongside Amitabh Bachchan, Jaya Bachchan, Shah Rukh Khan, Kajol and Hrithik Roshan. Kareena’s character in the film is still as iconic as it was in 2001.