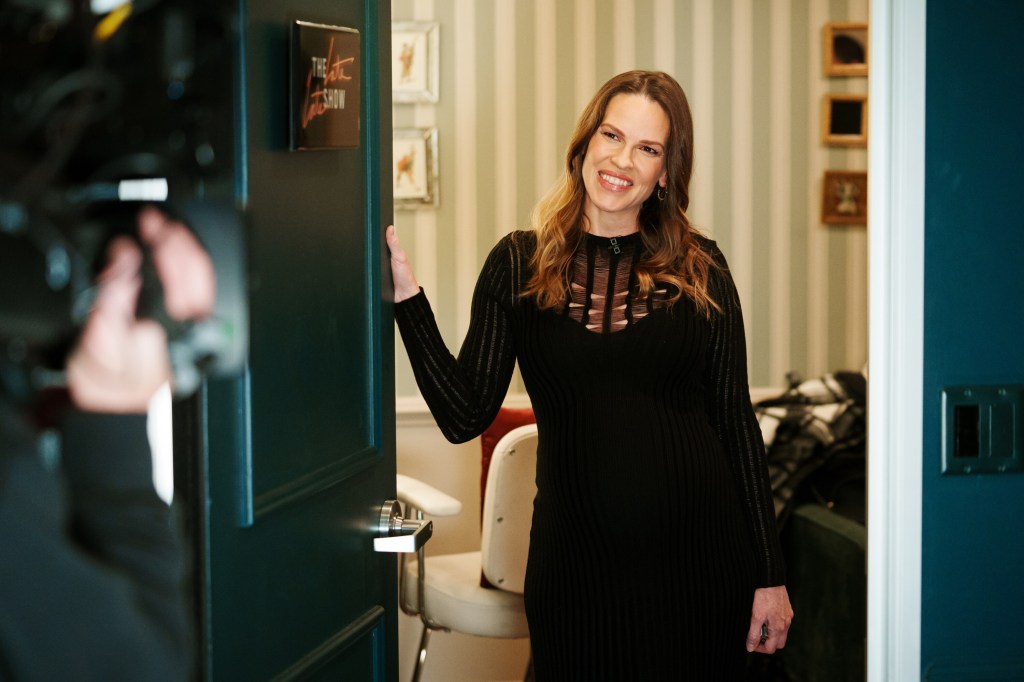 For her television segment on the program, the actress donned a long-sleeve black maternity dress with perforated sleeves and a perforated skirt and open stitching at the upper bodice. She coordinated the look with black open-toe strappy sandals. She accessorized with jewelry, including several rings on her fingers.

For makeup, Swank went for an elevated natural look featuring a glossy pink lip, blush and a touch of mascara. For hair, she had it parted down the center and done in a wavy style.

During her segment with James Corden, the actress discussed her role on the ABC primetime drama “Alaska Daily,” which tells the story of a journalist who moves to Alaska in search of a fresh start and ends up uncovering a story about missing and murdered Indigenous women.

Swank is nominated for a Golden Globe Award for Best Actress in a Television Series–Drama for her role in the show. The Golden Globes takes place Tuesday night.

Swank also discussed how she was pregnant while filming the show, only wrapping shooting of the first season last Friday. The actress revealed she had a body double who would do the walking scenes.

She also discussed how she faked being bad at running to hide her pregnancy during her first trimester before she went public with the announcement. She did so specifically to request the stunt double for the show and the running scenes. Swank first revealed her pregnancy in October 2022.

In addition to being nominated at the Golden Globes, Swank has her own fashion line keeping her busy. The actress is the founder of Mission Statement, a slow-fashion brand she launched in 2016.