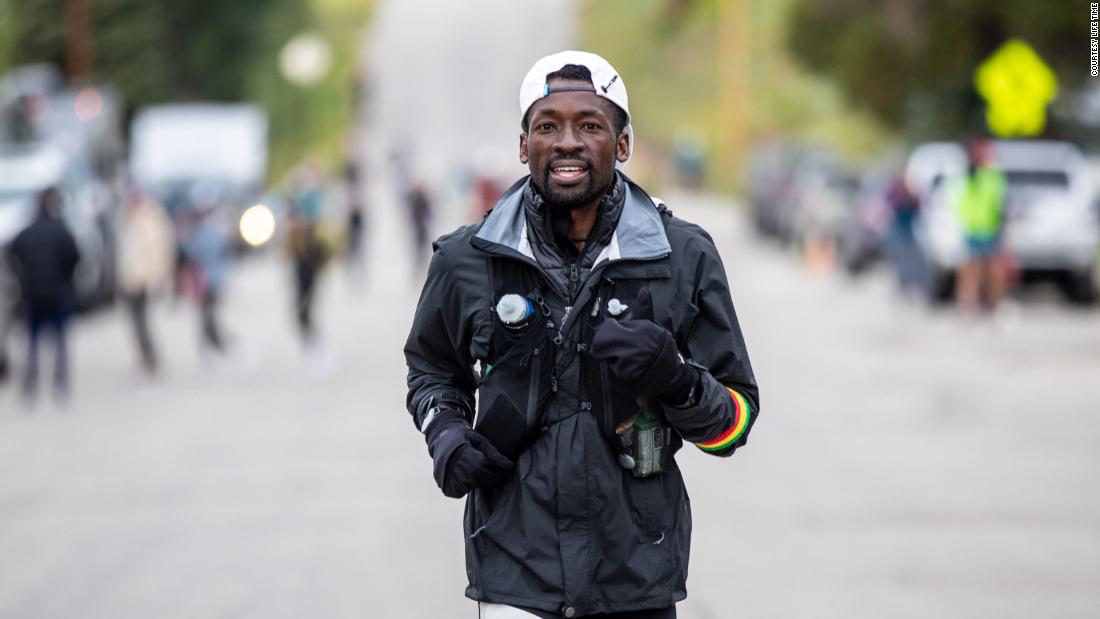 It’s a ritual he’s maintained for the past five-and-a-half years and the 31-year-old Sidibe doesn’t plan to break it anytime soon, regardless of where he is and what life throws at him.

On May 15, 2017, Sidibe decided to run for 10 minutes every day for two weeks. Tired of making empty promises about going to the gym, he wanted to hold himself accountable to a small, manageable exercise routine.

It wasn’t long before Sidibe started to scale up his ambitions. The runs became faster and further, and soon he planned to go every day for a year.

The days slipped by and gradually he started to tick off more milestones — two years, three years, 1,000 days. His only stipulation, to which Sidibe still adheres, is that his runs are outdoors and at least two miles long.

Unbeknownst to him, he had become a run streaker — a label for people who make a long-term commitment to running each day.

Sidibe may still be decades away from joining the long-serving disciples of streak running, but his five-and-a-half-year journey has radically redefined his view of the sport.

A promising soccer player in his youth, Sidibe saw running as a form of punishment and would have sleepless nights the day before fitness tests.

That quickly changed with the advent of his run streak.

“I just said: ‘I want to face a fear, but I’m inviting it in,'” Sidibe recalls. “I wasn’t pushing against it — I’m inviting this thing in that I don’t really know. I’m making it something that maybe isn’t that bad.

“I saw running as a privilege that not everyone has,” he continues. “I want to use that privilege of mine when there are people out there who can’t walk, let alone run. It fuels this thing in you, and you get out there and get it done — there are no excuses.”

Growing up in Mali, Sidibe would sometimes spend whole days playing football on streets and fields near his family home. He and his friends would idolize Brazilian great Ronaldo — crudely painting his name and the number nine on the back of their shirts — and at the same time, Sidibe dreamed of playing for Chelsea in the Premier League.

When his family moved to the US, those aspirations gathered pace. Sidibe played NCAA Division 1 soccer with the University of Massachusetts and later had interest from clubs in Major League Soccer and Bundesliga 2, the second division in Germany.

He signed a professional contract with Kitsap Pumas, an affiliate of the Seattle Sounders, but visa issues and a cap on the number of non-US citizens permitted on an MLS roster hampered his progress.

Eventually, Sidibe gave up on his soccer career.

“That hurts you — it doesn’t matter how hard you work, but this one piece of paper is preventing you,” he says about his visa problems.

“Things that I wasn’t in control of, kind of, put me in a state where, looking back, there’s definitely some depression there. I was always a happy guy, but I found myself always sad … I went into this dark spot in my life where I didn’t like anything, I wasn’t smiling as much, and I didn’t want to talk to anyone as much as I used to.”

Even now that Sidibe is a US citizen, he has no intentions of returning to soccer, his love for the sport diminished having shuffled between teams and trials.

Over time, running became the cornerstone of his life, and on day 163, his fiancée convinced him to make a YouTube video about the run streak.

Entitled “why I run every day,” it proved an instant hit. Views and comments flooded in, and the pair became YouTubers “overnight,” according to Sidibe. Today, their channel, HellahGood, has 276,000 subscribers, the top videos amassing millions of views.
As well as updates on his streak, the channel also documents Sidibe’s experience taking on feats of endurance — including his recent participation in the Life Time Leadville Trail 100 Run, an iconic 100-mile race in Colorado, and a 3,061-mile, 84-day run across America.

Sidibe believes he’s the first Black man ever to complete a solo run across America, a feat he accomplished last year by running an average of more than 36 miles a day across 14 states.

The challenge tested more than just his endurance. Sidibe says he was stopped and questioned by the police every day, each time explaining how he was completing a transcontinental run for charity — fundraising for the non-profit Soles4Souls — and that the RV ahead him was his two-person support team.

He also says he was sworn at, called racial slurs, and even threatened with a knife while running on Route 66.

In between those episodes, however, were “beautiful” moments: strangers offering him food, water and money, plus people running alongside him for stretches of the journey.

“Even though I had all these difficult times, these rough times … you couldn’t be mad about anything that was happening,” says Sidibe. “So many people are putting their energy and their power together just to help you.”

The ugly moments of the challenge were a reminder to Sidibe that running can make him vulnerable to racist abuse.

He says he’s never felt unsafe in his neighborhood in New Jersey but makes a conscious effort to “look like a runner” when he ventures further afield. That means wearing distinctive running gear — a vest, headphones, a backwards cap not covering his face — and carrying hiking poles on trails and hills.

“Even with the run across America, the pole that I was holding helped a lot on the hills, but a lot of the time, I didn’t need it,” Sidibe explains.

“I know if I’m holding it and I have a vest on, it’s going to make me look like I am doing something — I’m not just a person running. People are using my race to make judgments that shouldn’t even exist to target me.”

There were times during the run across America when Sidibe paused to think of Ahmaud Arbery, the 25-year-old Black man who was chased down and killed by three White men while out running in a neighborhood near Brunswick, Georgia.

“That could have been me,” says Sidibe, adding that Arbery’s death “scared so many runners.”

“For me, it’s important to be out there to represent, to make people like me say: ‘You know what, Hellah is doing it. I’m going to go — it’s okay, we’re fine, we’re safe,'” says Sidibe. “Let’s think about the positive side of it.”

Sidibe’s constant enthusiasm and infectious smile has endeared him to members of the running community, to whom he dispenses advice and shares his experience of run streaking.

While some would argue about the importance of rest days in any training routine, Sidibe says he manages his running load by including lighter days — sometimes going just two or three miles at a time — and stays injury-free with stretching, massages, foam rolling and strength training.

So far, he’s managed to keep his streak going through injury — dropping down to 14 miles a week while managing damage to his posterior shin — and surgery to remove a wisdom tooth.

Can Sidibe ever envisage his streak coming to an end?

“Only the day I wake up and feel I absolutely don’t like this,” he says. “I give myself permission to quit every day. There’s no pressure to continue and keep it up.”