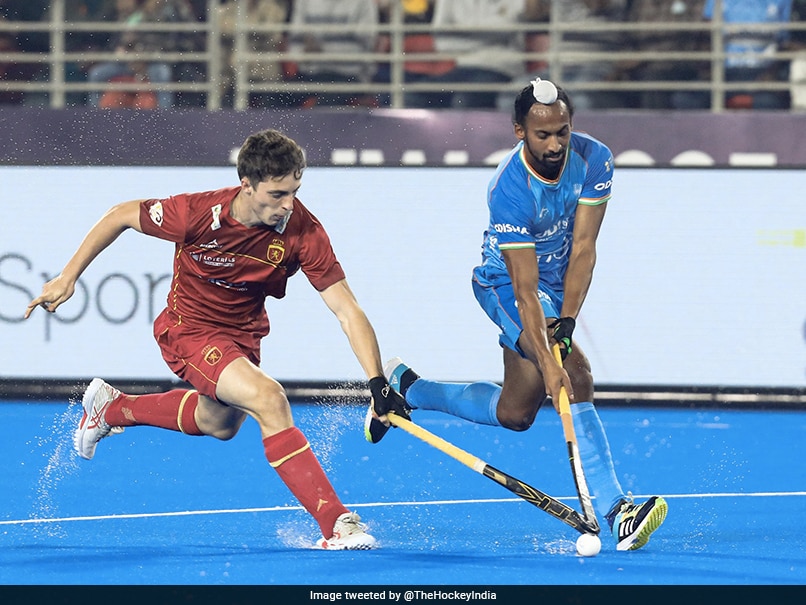 A commanding India dished out a superb show of attacking hockey to outplay a tricky Spain 2-0 in their FIH men’s World Cup campaign opener here on Friday. Local boy Amit Rohidas was among the goal scorers as he struck in the 12th minute from a penalty corner to the wild cheer of the packed Birsa Munda Stadium, which made its debut as an international hockey venue on Friday. Hardik Singh scored a brilliant field goal in the 26th minute after a fine solo run as India, chasing their first medal after 1975, boosted their chances of making it to the quarterfinals from Pool D.

The score-line did not reflect the degree of domination by India, who could have won by a bigger margin but the world number six team did not allow their European opponents, ranked two rungs below them, to play their game.

India got five penalty corners and scored from the second one.

Young goalkeeper Krishan Bahadur Pathak was brilliant in front of the bar as he made some fine saves, including from penalty corners. Spain were always a tricky opponent for India but it was the home team which dictated the terms to the Europeans, who had the upper hand in the four Pro League matches last year, winning two and losing one.

The Indians were quick on the attack as well as in counter-attack and won a lot of balls from their opponents. Spain had a couple of chances besides three penalty corners, which they wasted.

Spain dominated the midfield battle in the initial minutes without getting any scoring chance.

India settled down nicely after taking a measure of their opponents and started pressing towards the end of the first quarter.

Most of the attacks began from the right flank with Nilakanta Sharma, Mandeep Singh, Akashdeep Singh and Abhishek in the thick of things.

India’s incessant pressing paid off as they got three penalty corners in quick succession and took the lead in the 12th minute of the second one through Rohidas.

Harmanpreet’s drag-flick came off the stick of a Spanish defender and the ball fell to Rohidas whose powerful hit beat the Spanish goalkeeper all ends up.

Just a minute later, India got another penalty corner but Harmanpreet failed to find the target.

Just before the end of the first quarter, Abhishek outwitted a couple of Spanish defender inside the circle but the efforts did not result in a goal.

Nilakanta also took a shot but sent it wide.

The second quarter also went almost identical as the first, as action remained mostly in the Indian half initially as Spain pressed hard for the equaliser.

But four minutes from half time, Hardik made a fantastic run down the left channel and then sent a cross on the face of the goal. It beat the Spanish goalkeeper and forced a defender to deflect it in for India’s second goal.

Spain got their first first penalty corner soon but wasted it.

The third quarter did not yield any goal but had plenty of drama as captain Harmanpreet wasted a penalty stroke in the 32nd minute. His effort was ruled to have been saved by the Spanish keeper after a video referral by India.

Earlier in the day, England thrashed neighbours Wales 5-0 in another Pool D match.