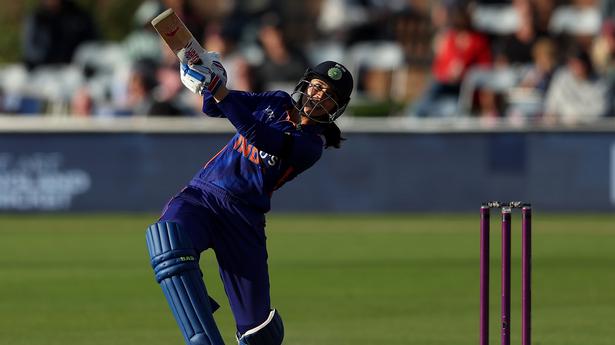 India takes on England in the second ODI in Canterbury on Wednesday. Harmanpreet Kaur’s team leads the series 1-0.

A confident Indian team will back itself to seal its first series victory in England since 1999 with another win over the hosts in the second women’s ODI on Wednesday.

Having endured a woeful 1-2 defeat in the T20I series, the Harmanpreet Kaur-led Indian side raised its standards in all the departments of the game to bounce back in three days’ time and defeat England by seven wickets in the series-opener at Hove on Sunday.

England is missing some of its senior players but India looked a much better team in the first game and it would be looking to ride the momentum.

In 1999, the Indian team had won the ODI series 2-1 with Anjum Chopra striking a hundred and a half-century.

It is also a farewell series for the great Jhulan Goswami as India do not have any 50-over assignment till June 2023.

Playing her first game since March, the 39-year-old world record holder for most wickets showed little signs of rustiness and was the most economical among the lot, returning with figures 10-2-20-1.

Indian vice-captain Smriti Mandhana led the batting show with a sublime 99-ball 91, while wicketkeeper batter Yastika Bhatia also struck a fifty, before skipper Harmanpreet finished off the clinical chase with an unbeaten 74.

The captain will be expecting the middle-order to step up and hope opener Shafali Verma does well as she has not scored a half-century in more than 10 innings now.

England on the other hand will hope that their batters put up a big total as they will rely heavily on in-form Sophia Dunkley, who had a successful T20I series.

Dunkley and Alice Capsey once again looked dangerous in the middle before a one-handed catch by Harmanpreet broke the partnership and triggered a collapse.

If India manage to win the second game, it will be a massive confidence booster for a team trying to find its feet in 50-over cricket.

Where to watch IND-W vs ENG-W 2nd ODI?

The second WODI between India and England will be telecast on the Sony Network and streamed online on SonyLiv app from 5:30PM IST.