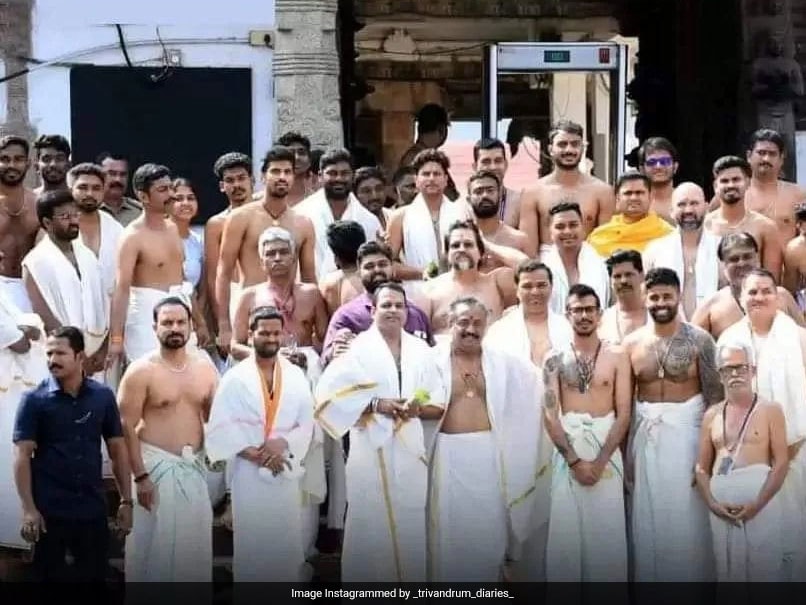 Members of the Indian cricket team visited the Padmanabhaswamy Temple in Thiruvananthapuram on Saturday after they arrived in the city ahead of the third ODI against Sri Lanka. Suryakumar Yadav, Shreyas Iyer, Axar Patel, Yuzvendra Chahal, Washington Sundar, Kuldeep Yadav and team India’s throwdown specialist Raghu visited the temple and offered prayers. The players wore traditional attire – white dhoti and angavastram – while posing with the temple authorities.

KL Rahul had earlier visited the temple in September 2022 to seek the blessings of Lord Vishnu.

The Indian team has clinched the ODI series with wins in Guwahati and Kolkata ODIs. They will be looking to clean sweep the ODI series when they face Sri Lanka on January 15 at the Greenfield International Stadium, Thiruvananthapuram.

KL Rahul and Axar Patel will not feature in the New Zealand Home series due to family commitments. KS Bharat, Washington Sundar, Shahbaz Ahmed and Shardul Thakur have been roped in for the limited-overs assignment against the Kiwis.

Hardik Pandya will lead the side in the three-match T20I series with star batsmen Rohit Sharma, Virat Kohli and Shreyas Iyer missing the T20I leg of the series.

Prithvi Shaw has been named in the T20I squad on the back of stunning performances in the Ranji trophy where he smashed 379 runs against Assam, the second-highest individual score in the history of the tournament.

Ruturaj Gaikwad has also made it to the T20I squad. Match-winning performance from left-arm chinaman Kuldeep Yadav in the ODI series against Sri Lanka has helped him earn a place in the T20I squad.

Jitesh Sharma and Rahul Tripathi have managed to hold onto their places in the T20I squad.

India’s pace spearhead Jasprit Bumrah is a notable absentee from the squads of both the limited-over series. He continues his rehabilitation after suffering a back injury.