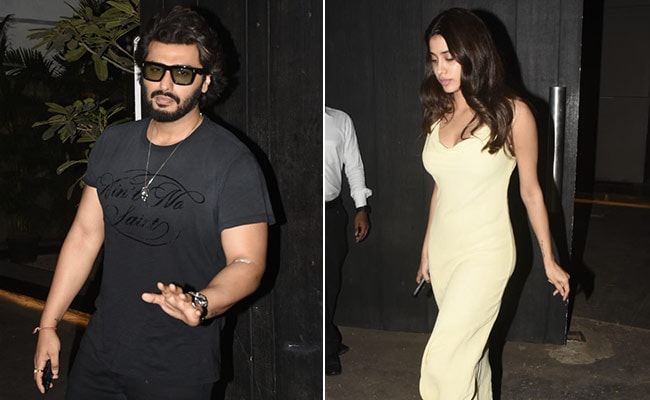 Arjun Kapoor and Janhvi pictured at the party.

New Delhi: Film producer Boney Kapoor, who celebrates his 67the birthday today, hosted an intimate dinner for friends and family on Thursday at his Mumbai residence. The guest list included the usual suspects – Boney Kapoor’s kids Janhvi, Arjun and Anshula Kapoor. Also pictured at the bash was Boney Kapoor’s sister-in-law Maheep Kapoor (married to Sanjay Kapoor), Maheep and Sanjay’s daughter Shanaya and their son Jahaan were also pictured arriving at the party. The other guests at the party, besides member of the Kapoor family, included veteran actors Shabana Azmi and Satish Kaushik.

Janhvi Kapoor pictured at the party.

Arjun Kapoor at the party.

Anshula Kapoor at the party.

Maheep Kapoor at the party.

Shanaya Kapoor at the party.

Jahaan Kapoor at the party.

Boney Kapoor at the party.

Shabana Azmi at the party.

Meanwhile, Boney Kapoor also shared a couple of inside pictures from his birthday celebrations, in which he can be seen cutting the cake with Arjun and Anshula and he captioned it: “It was wonderful to bring in my birthday with my family and my good friends.. Love and light to all.” Shabana Azmi, who also features in a couple of pictures, wrote: “Salgirah mubarak Boneyji . Bahut saara pyar ( Happy anniversary, Boney. Lots of love).”

Janhvi Kapoor wished her dad with an ROFL post. “Happy birthday to the cutest Papa in the whole world. I love you more than you can every imagine. You’re the strongest man I know and I’m the luckiest girl because I get to call you my dad. Love you pap,” she wrote.

Anshula and Arjun Kapoor are film producer Boney Kapoor’s children with his first wife Mona Shourie, who died in 2012. Janhvi and Khushi Kapoor are late actress Sridevi and film producer Boney Kapoor’s daughters. Both Arjun and Janhvi are Bollywood actors. Khushi studied at the New York Film Academy and she is all set to make her Bollywood debut with Zoya Akhtar’s The Archies, alongside Shah Rukh and Gauri Khan’s daughter Suhana and Amitabh Bachchan’s grandson Agastya Nanda.

In terms of work, Boney Kapoor recently produced the thriller Mili, starring daughter Janhvi Kapoor and actor Sunny Kaushal. The film is a Hindi remake of the Malayalam thriller Helen.