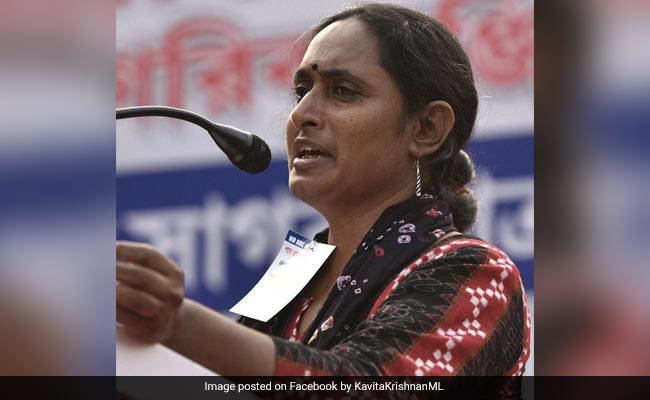 Kavita Krishnan was a member of top bodies of Communist Party of India (Marxist-Leninist) Liberation.

New Delhi: Kavita Krishnan, one of the most prominent faces of the CPI(ML) Liberation, today quit all her party posts, pointing to some “troubling questions” about the Soviet Union under Stalin and the current Chinese government, and their parallels with India under Narendra Modi.

A member of the party’s top body, the Polit Buro, she was also a Central Committee member of the Communist Party of India (Marxist-Leninist) Liberation for more than two decades before she announced that she’s been relieved of her responsibilities upon request.

“For our fight for democracy against fascism and growing totalitarianism in India to be consistent, we must acknowledge the entitlement to the same democratic rights and civil liberties for all people across the world, including subjects of socialist totalitarian regimes past and present,” she wrote in the announcement on Facebook.

Ms Krishnan is a prominent commentator on TV and Twitter, and now says she would raise the questions through her writings that she could not if she held party positions.

“[There is a] need to recognise that it is not enough to discuss the Stalin regime, USSR, or China as failed socialisms but as some of the world’s worst authoritarianisms that serve as a model for authoritarian regimes everywhere,” she wrote on Facebook.

She has been raising the questions that she refers to, in her recent posts. In July, she said industrialisation of the USSR under Stalin was done with “violent subjugation of Ukraine’s peasants”.

“If any Indian communist thinks it’s ok for ‘communists’ to rule like this, then they should ask themselves what kind of democracy they’re fighting for in India,” she wrote in June, on reports about surveillance of citizens in China.