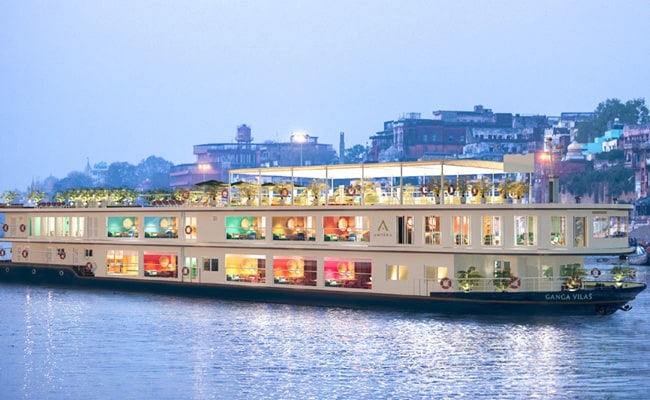 The ship, however, wasanchored in the river and the tourists took the boats for sightseeing.

New Delhi: MV Ganga Vilas cruise didn’t get stuck and the reports claiming so are “absolutely” false, said the operator of the ship which was flagged off by Prime Minister Narendra Modi just three days ago. “The ship has reached Patna as per schedule,” Raj Singh, Chairman of Exotic Heritage Group which is operating the “world’s longest river cruise”, told NDTV.

Several reports claimed that the ship got stuck on the third day of its 51-day journey in Bihar’s Chhapra due to shallow water in the Ganga and that several small boats took the tourists to safety.

The ship, however, was anchored in the river and the tourists took the boats for sightseeing. “The ship always remains in the main channel. The big ships can’t go to the shore. This is normal for a cruise ship,” he said.

The tourists took the boat to see Chirand – an archaeological site – and got back, said Mr Singh.

“The ship is currently anchored at Patna and not at the jetty because there are thousands of people who have come to see the ship and there are privacy and safety issues. So, we can’t bring the ship to the jetty for the safety and security of the passengers. There’s nothing wrong in that and it’s just a precaution that we are taking,” he added.

The one-of-its-kind cruise will cover 50 tourist destinations including world heritage sites, national parks, river ghats, and major cities like Patna in Bihar, Shahiganj in Jharkhand, Kolkata in West Bengal, Guwahati in Assam, and Dhaka in Bangladesh.

Vegetarian Indian cuisine, assorted non-alcoholic beverages, a spa and doctors on call are some of the features of the world’s longest luxury river cruise and will cost Rs 25,000 to Rs 50,000 a day, with the total cost for the 51-day journey totalling to around Rs 20 lakh for each passenger