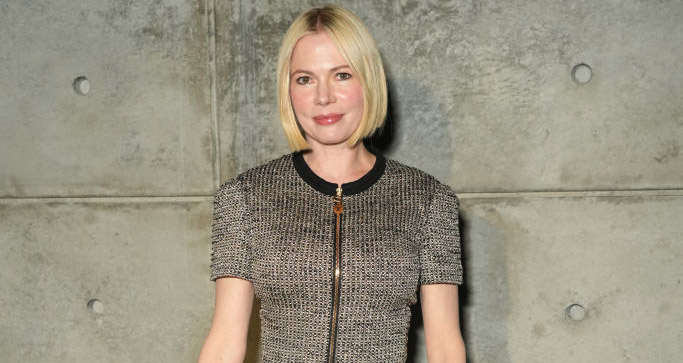 For the event, Williams wore a short-sleeve tweed minidress with a gold zipper and black collar paired with black platform shoes and a metallic gold trunk clutch bag, all from Louis Vuitton.

Williams has a longstanding relationship with Louis Vuitton that dates back close to a decade. In 2013, the brand tapped the actress to spotlight their W and Capucines handbags. The campaign broke in an issue of Marie Claire France.

Williams would reunite with Louis Vuitton a year later in 2014 to appear in the ad campaigns for the brand’s city bags, including new season versions of the Capucines, as well as the Alma and Lockit.

For makeup, Williams went for an understated look, featuring a glossy pink lip, a hint of pink blush and eye-popping mascara. For hair, she had her short blonde bob done in a straightened style.

Williams is nominated for the Golden Globe Award for Best Actress Motion Picture–Drama for her role in Steven Spielberg’s “The Fabelmans.” Williams recently attended the Palm Springs International Film Festival, where “The Fabelmans” won the Vanguard Award, which honors a distinguished film cast and its directors.

Williams is currently in development to play famed American jazz singer Peggy Lee in a biopic called “Fever.” The film will explore the singer’s seven-decade career.

W and Louis Vuitton’s dinner was hosted by W editor in chief Sara Moonves and Louis Vuitton artistic director Nicolas Ghesquière. The dinner brought together stars from the worlds of film and television, many of whom are nominees and front runners for tomorrow’s Golden Globe Awards and the upcoming Academy Award nominations.