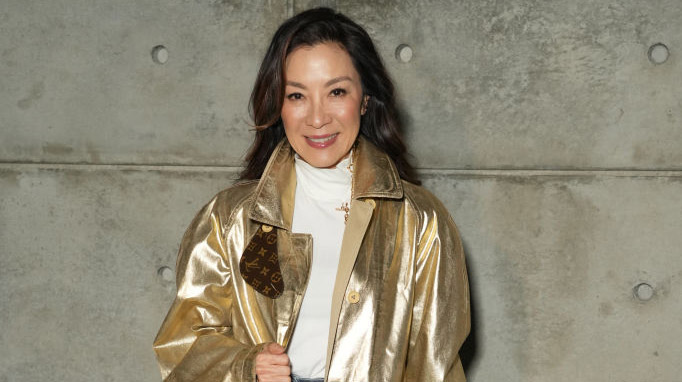 Michelle Yeoh arrived at W Magazine and Louis Vuitton’s awards season dinner on Friday, wearing a look inspired by the gold statues she could potentially receive this awards season.

For the occasion, the actress donned a gold trench coat with a brown Louis Vuitton collar attachment, a white turtleneck shirt, wide-leg medium-wash jeans, white and brown shoes and a green trunk clutch bag, all from Louis Vuitton.

To create her look for the event, Yeoh worked with her go-to stylist, Jordan Johnson Chung. Johnson Chung has also dressed the actress in brands including Bottega Veneta, Schiaparelli and Erdem. The stylist also works with Kathryn Hahn, Sandra Oh and Jennifer Garner.

Yeoh’s been making waves since the March 2022 release of her film “Everything Everywhere All at Once,” where her performance as the character Evelyn Quan Wang received high praise. Yeoh is a contender for several acting accolades this season for the role, including the Golden Globe Award for best actress in a motion picture musical or comedy.

Last year was also a busy time for Yeoh, who had multiple film projects. She also provided the voice of Master Chow in “Minions: The Rise of Gru,” and she starred in the Netflix film “The School for Good and Evil” as Professor Anemone.

W and Louis Vuitton’s dinner was hosted by W editor-in-chief Sara Moonves and Louis Vuitton artistic director Nicolas Ghesquière. The dinner brought together stars from the worlds of film and television, many of whom are nominees and front-runners for Tuesday’s Golden Globe Awards and the upcoming Academy Award nominations.