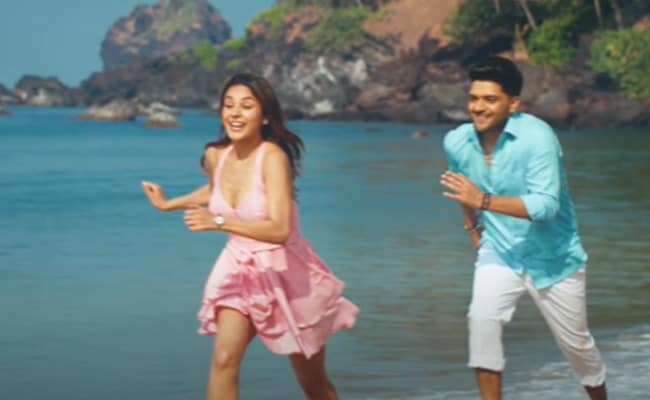 A still from the video. (courtesy: T-Series)

Fans have much to rejoice as Guru Randhawa and Shehnaaz Gill’s new song has finally dropped and it is just as dreamy as we hoped. The song features the two stars in a bunch of picturesque locations including a scenic beach. Moon Rise features Guru and Shehnaaz laughing and frolicking with the pristine waters in the background. The chemistry of the actors has already received praise from fans on social media. Moon Rise has been sung, composed and penned by Guru Randhawa with music production by Sanjoy. The music video has been produced by Gulshan Kumar’s T-Series and the song has been choreographed by Deush Mehra.

Before the song was released, Shehnaaz Gill had shared a photo with Guru Randhawa. She wrote: “Hope aap sab humme itna hi pyaar de. Song out tomorrow at 1pm. #MoonRise

Shehnaaz Gill also shared a glimpse of the song on social media with the caption, “2023 is going to see a new kind of #Moonrise,” followed by a heart emoji. She added: “Cannot hide my excitement for this one from #ManOfTheMoon album. Moon is rising on 10th January 2023. Stay tuned.”

She also tagged T-Series, Bhushan Kumar and Guru Randhawa in the post.

Meanwhile, Guru Randhawa had shared a poster of the album and said: “Super excited to bring to you #Moonrise from #ManOfTheMoon. Moon is rising on 10th January 2023. Stay tuned.”

Guru Randhawa and Shehnaaz Gill had also shared a video of some behind-the-scenes moments from the shoot of the song. They are seen giggling as they pose for the camera. The caption read: “Caption khud likh lo. Mujhe nhi kuch samaj aa raha (Write the caption yourself. I don’t understand anything).”