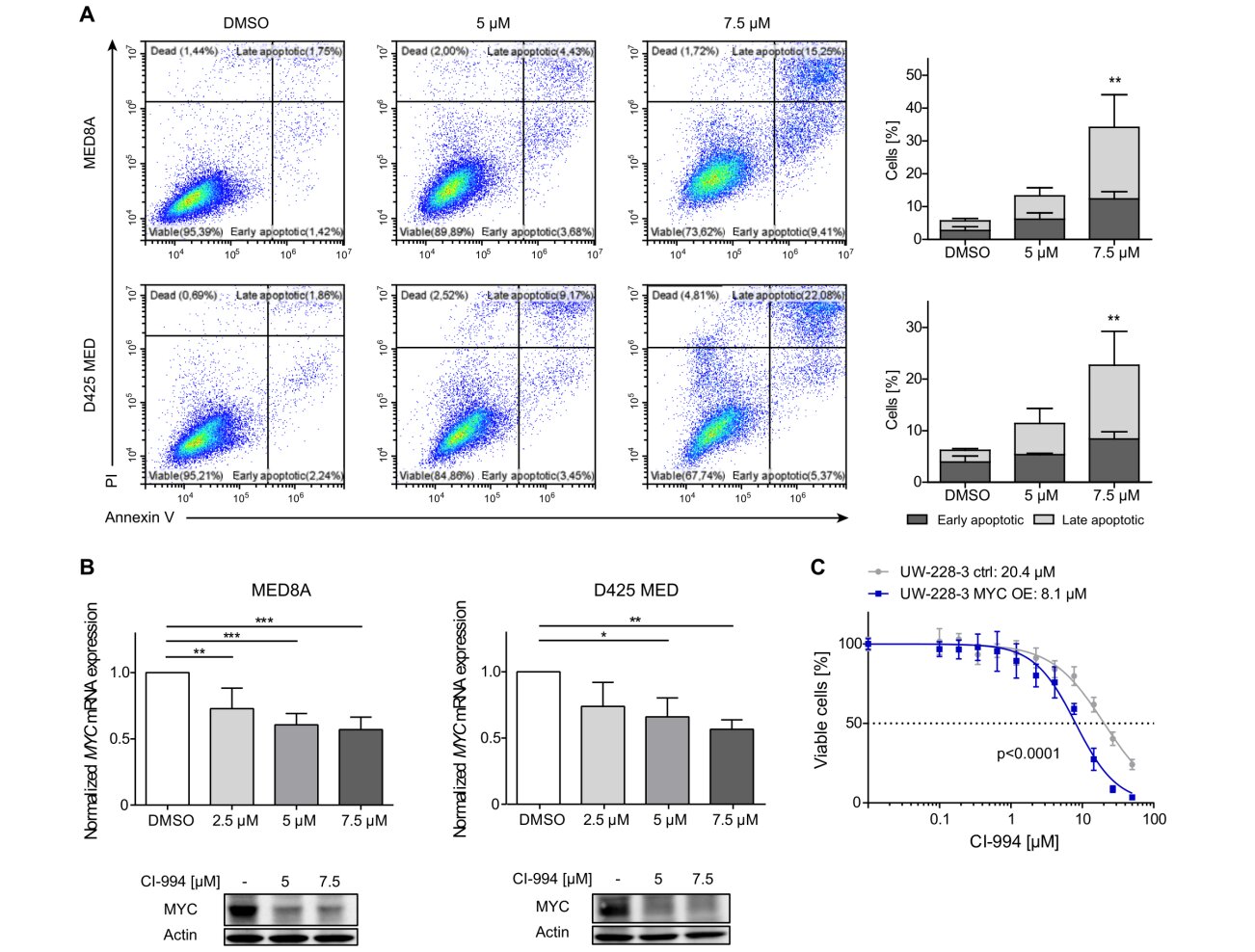 Researchers at the University of Colorado Anschutz Medical Campus have discovered a drug combination that may offer a better prognosis for children diagnosed with MYC amplified Medulloblastoma, an often deadly form of brain cancer. The research was conducted in collaboration with the German Cancer Consortium (DKTK) University Hospital Dusseldorf.

“An oncogene called MYC is amplified in these tumors making them very susceptible to recurrence. In addition, there’s a greater risk of it spreading to other areas of the brain and down the spine,” said Siddhartha Mitra, Ph.D., assistant professor of Hematology-Oncology and Bone Marrow Transplant at the University of Colorado School of Medicine and University of Colorado Cancer Center member. “The five-year survival rate of this cancer is less than 45 percent. We wanted to discover better treatment options for these kids.”

Mitra’s team discovered that two drugs which have already cleared phase I safety trials in other solid tumors have a significant impact on these tumors when used together.

Using the epigenetic drug tacedinaline, the team discovered that in addition to making tumors grow MYC was also hiding the tumors from the various immune cells in the body. They were able to unblock what are referred to as “don’t eat me pathways” that prevent macrophages in the immune system from consuming a tumor.

Then they made the tumor more enticing.

“When we used tacedinaline to unblock those pathways, and then added anti-CD47, a drug which makes macrophages become super eaters, the tumor became extremely appetizing to the macrophages enticing them to eat the tumor that was unblocked,” Mitra said. “You are essentially harnessing the body’s own immune system by giving it a jumpstart, much like a medical version of PacMan.”

Mitra, who is also also part of The Center for Cancer and Blood Disorders at Children’s Hospital Colorado, said that while traditional therapies like chemotherapy have previously targeted the tumor growth pathways this is the first time pathway immune evasion pathways are being targeted in these types of devastating brain tumors.

“Traditional adult cancer drugs don’t work well in kids because children are still developing and their normal cells divide at a rapid pace,” said Mitra. “This drug combination could potentially help not only minimize the negative impacts of traditional cancer treatment in kids, but also give patients diagnosed with MYC amplified Medulloblastoma a better chance at survival.”

The study is published in the Journal for ImmunoTherapy of Cancer.

Mitra said the next step will be a clinical trial to determine both the short and long-term effects of this treatment. In addition to the Mitra lab, the Labs of Dr Sujatha Venkatraman and Professor Rajeev Vibhakar from CU-Anschutz were also involved.