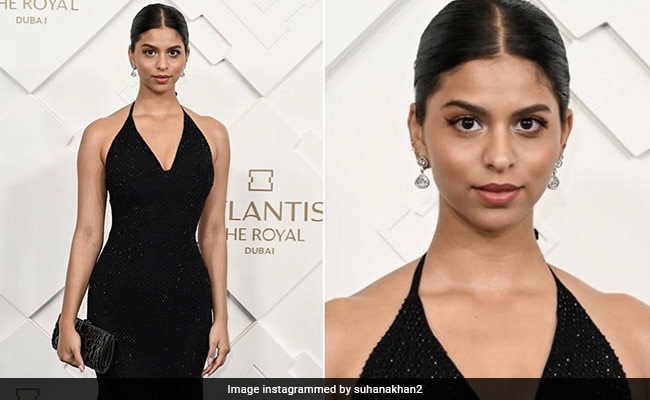 Leave it to Shah Rukh Khan to make you go aww while also tickling your funny bone at the same time. The actor is trending on the Internet for more than one reason – of course, for the release of his film Pathaan tomorrow but also for dropping an adorable yet ROFL comment on his daughter Suhana Khan’s latest Instagram post. On Monday, Suhana shared a set of stunning photos of herself from the grand launch of the luxury hotel Atlantis The Royal in Dubai’s Palm Jumeirah. In the pics, Suhana is looking surreal or in Shah Rukh’s words, “elegant.” While sharing the photos that also feature her mom Gauri Khan and BFF Shanaya Kapoor, Suhana wrote, “Thank you, Atlantis The Royal.” Shortly after that, SRK seized the opportunity to react to the post. He commented, “Too elegant baby… so contrary to the pyjamas you wear around the house!” To this, Suhana replied: “Thanks” and added adorable emojis.

In the first image, Suhana Khan is seen wearing a black gown with a halter neck and a cowl neckline. She completed her look by tying her hair in a sleek way with a middle partition. The next photos show Suhana Khan looking stunning as ever in a sleeveless baby pink mini dress.

This isn’t the first time Shah Rukh Khan has dropped a cute comment on Suhana’s social media posts and given us dad goals. Last year, when she posted her gorgeous look from Bhumi Pednekar’s Diwali party, SRK was quick to react. He wrote, “The speed at which they grow up, defies the laws of time… so elegant and graceful (did you tie the saree yourself?).” Here’s the post we are talking about:

Suhana Khan attended the lavish Dubai event over the weekend with mom Gauri Khan and friend Shanaya Kapoor. The BFFs are all set to make their Bollywood debuts. Suhana and Shanaya also attended model and reality TV star Kendall Jenner’s 818 Tequila brand afterparty at the hotel. A glimpse of the party was shared by Shanaya on her Instagram Stories.

Suhana Khan is all set to make her acting debut in Bollywood with Zoya Akhtar’s The Archies. Shah Rukh Khan, on the other hand, is prepping for the release of Pathaan, his first film in four years. The actor co-stars with Deepika Padukone and John Abraham in the Siddharth Anand film.