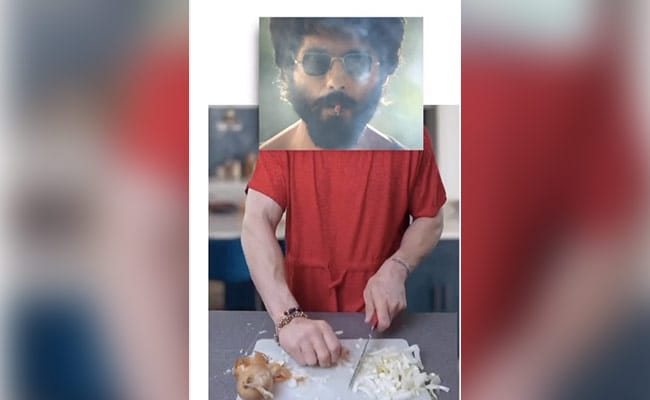 A still from the video. (courtesy: shahidkapoor)

Shahid Kapoor is one fun person. From recording candid videos with his wife Mira Rajput to coming up with hilarious captions, the actor does it all and how. Now, Shahid is back with a rib-tickling clip. The actor has tried his hands at a Reels. He has borrowed the concept from digital content creator Duncan Evans. Oh, and, it involves onions. The video is all about chopping onions and how people shed tears the moment they start the process. Of course, Shahid has given a filmy twist to it.  The actor has used some mug shots from his movies to describe the emotion in each stage of onion chopping. From Aditya Kashyap in Jab We Met to rowdy Kabir in  Kabir Singh, the editing is top-notch. Too good, Shahid. Wait, there is more. Shahid’s caption can’t be missed. He wrote, “One day, I am going to make the onions cry.” Relatable? Replying to the post, Shane Peacock said, “Too funny !! Well made though.”

A while back, Shahid Kapoor shared a super fun video featuring himself and Mira Rajput. The actor asks Mira about “hairy legs”. Oh yes, he did. The clip opens with Shahid asking Mira, What is your favourite thing about me, Mira? You have a second.” Mira replies,  “Me.” Shahid isn’t convinced and requests her to give a serious reply. She says, “When you are finally wearing jeans.”

Shahid Kapoor immediately teases Mira Rajput with his next question, “Why don’t you like my legs? Do you like hairy legs, or leggy hairs?” An embarrassed Mira asks Shahid to stop recording the video.  At the time of sharing the clip, the actor wrote “It’s all about my laagzzz! Isn’t it Mira Kapoor?”

Meanwhile, Shahid Kapoor is gearing up for his OTT debut Farzi. The web series will be released on February 10. The crime thriller, by director duo Raj Nidimoru and Krishna DK, also stars Tamil star Vijay Sethupathi in the lead role. The plot revolves around a clever underdog street artist’s pursuit to con the system that favours the rich.