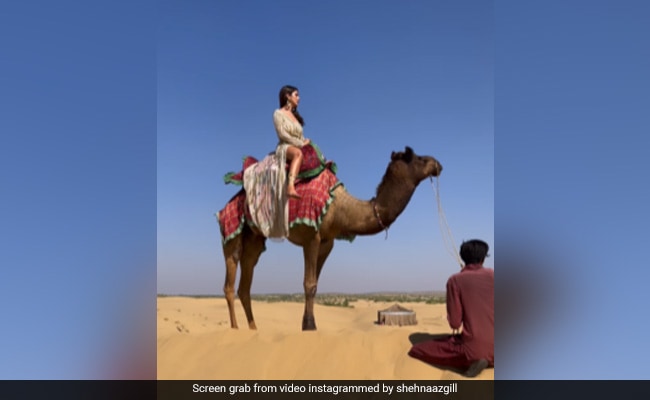 Shehnaaz Gill in a still from the video. (courtesy: shehnaazgill)

Shehnaaz Gill always believes in keeping it real – both onscreen and offscreen – and it is also precisely why fans love her. The singer-actress has shared a hilarious new video on Instagram, in which she is seen perched on a camel. While there is a man to handle the camel, Shehnaaz looks visibly nervous. The video shows the camel attempting to move and making noises. Upon hearing the camel and feeling it move, Shehnaaz Gill begins to cry out in fear. In the caption, she wrote: “Jaan hai toh jahan hai …. main dar gyi thi (If you have life, you have the world. I was scared).” Singer-composer Yashraj Mukhate replied to the post with laughing emojis.

Shehnaaz Gill was recently seen in the music album Moon Rise.  The music video features her with Guru Randhawa. In it, the two are seen enjoying each other’s company against a backdrop of serene waters. Fans have already taken notice of the chemistry between the actors, praising their on-screen charisma. The song has been written, composed, and sung by Guru Randhawa, with Sanjoy handling the music production. The music video is a production of Gulshan Kumar’s T-Series, and the choreography was handled by Deush Mehra.

Before the release of the song Moon Rise, Shehnaaz Gill shared a photo with Guru Randhawa on social media. She hoped that fans would show them as much love as they had for the song.

Shehnaaz Gill also gave a sneak peek of the song with the caption, “2023 is going to see a new kind of #Moonrise.” She added that the song would be out on January 10, 2023, and urged her followers to stay tuned. She tagged T-Series, Bhushan Kumar and Guru Randhawa in the post.

Guru Randhawa and Shehnaaz Gill also shared a behind-the-scenes video from the shoot. They were seen having a good time together as they posed for the camera. The caption for the video read: “Caption khud likh lo. Mujhe nhi kuch samaj aa raha (Write the caption yourself. I don’t understand what to write).” Shehnaaz’s BFF, stylist Ken Ferns, commented on the post, saying, “Not a single word I have understood except for ‘LIGHT’ and that clearly represents you. Also ‘light shirt de?”’ Mrunal Thakur also replied saying: “Hahahaha cuties.”