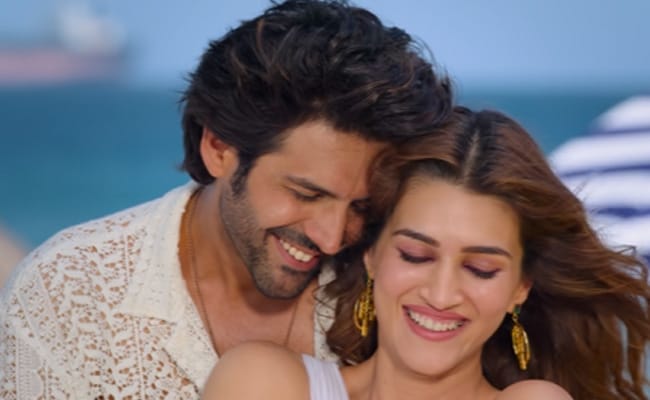 A still from the video. (courtesy: T-Series)

Kartik Aaryan and Kriti Sanon are back and the result is magical. The actors, who were last seen together in Luka Chuppi, will share screen space once again in Shehzada. Days after the trailer release, the makers have dropped the first song titled Munda Sona Hoon Main. It features Kriti and Kartik dancing on the beach, looking amazing together. The track has been composed by Pritam and sung by Diljit Dosanjh and Nikhita Gandhi. The lyrics are by Kumaar with choreography by Bosco-Ceaser. The music is produced by T-Series.

You can watch the video here:

Shehzadais a remake of the Telugu film Ala Vaikunthapurramuloo. The trailer of the film, released last week, opens up with an action sequence where Kartik is fighting bad guys. In the background, we can hear the actor saying, “When it comes to the family then there is no discussion, only action.” The three-minute-long video summarises the plot of the movie. Kartik, who grows up in a middle-class family, learns he is actually the son of a multi-millionaire man (played by Ronit Roy). On learning the truth, he decides to claim his position in the (real) family. The trailer also namechecks director SS Rajamouli and why not! After all, the filmmaker is the toast of the town.

On the ocassion of Makar Sankrant, Kartik Aaryan wished fans in Shehzada style. He shared an image in which the actor is looking at a giant kite with the title of the film written on it. Along with the pic, Kartik wrote, “Happy Makar Sankranti from your Shehzada.”

Shehzada has been directed by Rohit Dhawan and stars Manisha Koirala, Paresh Rawal, Ronit Roy, Sachin Khedekar in important roles.  The film is set to release on February 10.