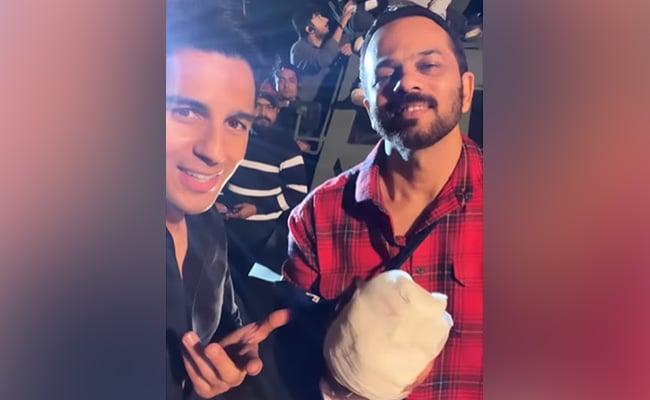 A still from the video. (courtesy: sidmalhotra)

Sidharth Malhotra has shared a health update about Rohit Shetty. The director-producer was rushed to the hospital on Saturday after he picked an injury on the sets of his upcoming web series Indian Police Force.Now, Sidharth, who is also part of the show, has dropped a video on Instagram. The clip opens with Sidharth introducing the “OG action master” Rohit Shetty.  He says, “Guys, we have the OG action master right here who after a very unfortunate incident yesterday is still back on set.” Sidharth then asks, “Sir, how are you feeling?” To this Rohit Shetty, who is seen with a bandaged hand, says, “First, I would like to thank you for all the concerns, the prayers and so many calls… kuch zyada nhi hua he, do ungli mein khali stitches lage he, that’s it… (Nothing much has happened, I have got stitches on two of my fingers)”. Then Sidharth adds, “It all because of Rohit Sir, the OG rock star, who is back on sets…It is not even 12 hours. The whole crew is here.”

The side note read, “A true master leads by example. We all know about Rohit Shetty sir’s love for action and his passion towards the stunts he directs. Last night while performing a car stunt action piece himself, he met with an unfortunate accident. After a sleepless night and a minor surgery, he’s back on set in less than 12 hours. Sir, you are an inspiration to all of us. Love and respect.”

Rohit Shetty also shared an update from the sets on Instagram. He wrote, “Another car topple… but this time with stitches on 2 fingers…. Nothing to worry about, I am absolutely fine… thank you so much for your love and concern…”