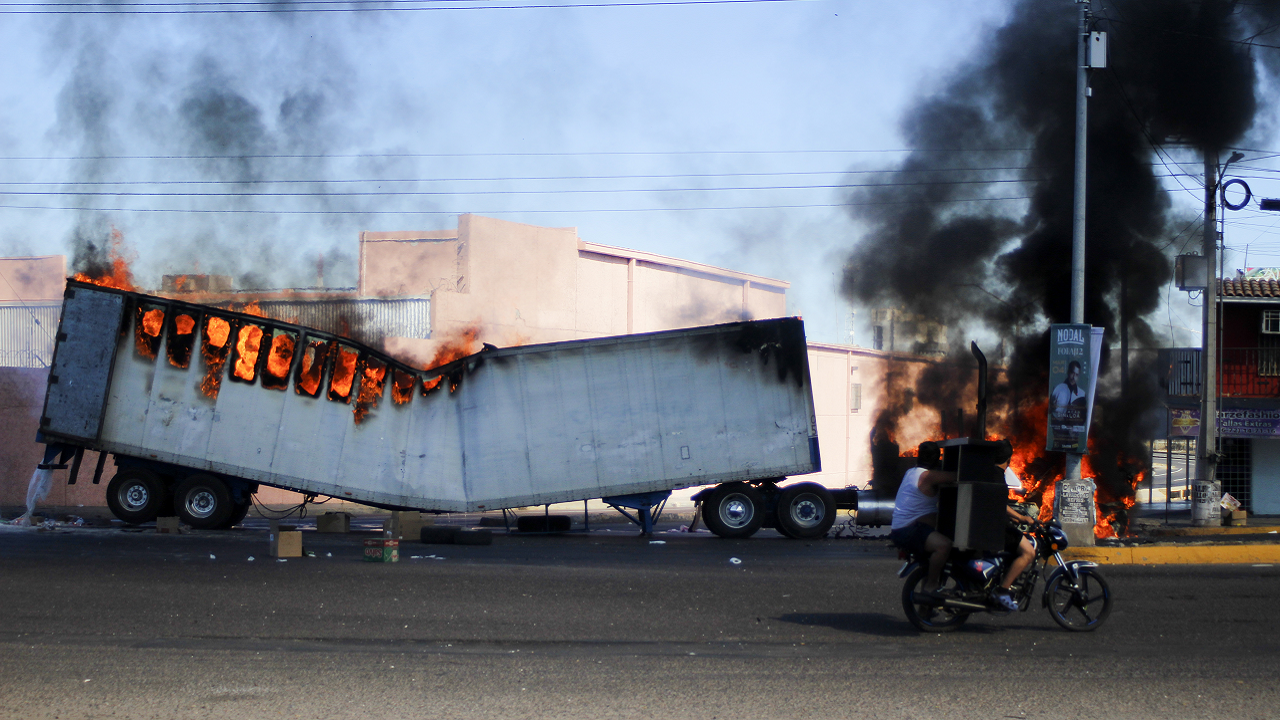 The state of Sinaloa, Mexico, is being hit with a wave of violence, officials say, following the arrest of the son of jailed drug cartel kingpin Joaquin “El Chapo” Guzmán in the days leading up to President Biden’s visit to the country.

Sinaloa state governor Ruben Rocha told Reuters that so far seven members of Mexico’s security forces have been killed and 21 were injured in a dozen clashes within the northern Sinaloa state, home to the cartel with the same name that once was run by El Chapo. Ovidio Guzmán, his son, was arrested there Thursday by Mexican authorities, officials confirmed.

Rocha also said there have been 25 acts of looting and 250 vehicles have been set on fire to block roads, with most of the unrest happening in the city of Culiacan.

Men ride on a motorcycle past a burning truck on the streets of Culiacan, Sinaloa state, Mexico, on Thursday.
(AP/Martin Urista)

Mexican authorities previously detained Ovidio Guzmán in 2019, but quickly released him to avoid a massive confrontation with cartel forces.

Culiacan’s airport also has been swept up in the violence, with airline Aeromexico reporting that one of its planes was hit with bullets ahead of a scheduled flight to Mexico City, according to Reuters.

This frame grab from video provided by the Mexican government shows Ovidio Guzmán at the moment of his earlier detention, in Culiacan, Mexico, on Oct. 17, 2019.
(CEPROPIE via AP File)

One passenger on that plane, who boarded with his wife and three children, told the news agency that his family decided to stay at the airport until the situation calms down.

“The city is worse,” David Tellez said. “There is a lot of shooting and confusion.”

Police arrive on the scene after a store was looted in Culiacan on Thursday.
(AP/Martin Urista)

Biden is set to visit the U.S.-Mexico border over the weekend before heading to Mexico City for meetings with Mexican President Andres Manuel Lopez Obrador and Canadian Prime Minister Justin Trudeau.

Greg Norman is a reporter at Fox News Digital.