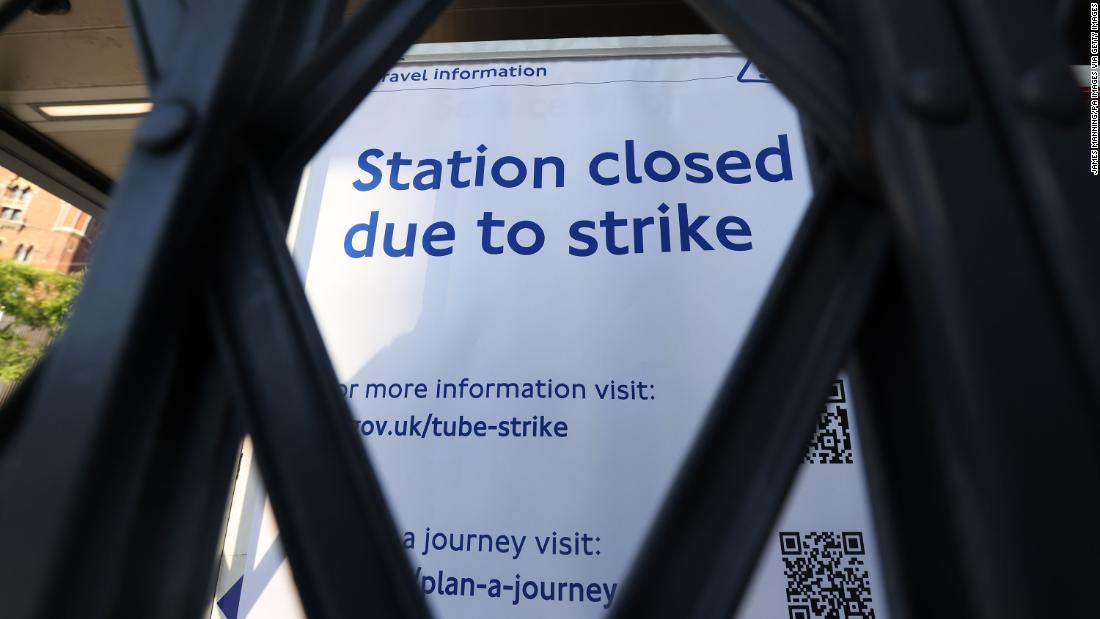 Now, one day after the monarch’s funeral, strikes are back on as workers press their claims for better pay and conditions and annual inflation hovers around 10%.

Earlier this month, rail and postal worker unions paused plans to walk out over demands for higher pay in the wake of the Queen’s death.

The National Union of Rail, Maritime and Transport Workers (RMT) said Tuesday that more than 40,000 workers spanning 14 train operators and Network Rail, the owner of the national railway infrastructure, would strike for 24 hours starting on October 1 in a dispute over pay, job security and conditions.

The RMT said the action — which will coincide with separate strikes by other rail staff and bus workers — would bring Britain’s railways to an “effective standstill.”

“Transport workers are joining a wave of strike action on October 1st, sending a clear message to the government and employers that working people will not accept continued attacks on pay and working conditions at a time when big business profits are at an all-time high,” RMT general secretary Mick Lynch said in a statement.
Since June, RMT members have walked out for a total of six days over the same demands, joining thousands of UK workers — including journalists, lawyers and call center workers — who have downed tools as they struggle with the worst cost-of-living crisis in decades. Average wages have failed to keep pace with soaring consumer price inflation, which stood at 9.9% in the year to August.

More strikes could be on the way this fall, threatening unprecedented disruption across a range of industries. Teachers, doctors and nurses are set to vote on strike action in the coming weeks. More unions could even coordinate their walkouts. Unite and Unison — the country’s biggest unions with 2.7 million members in total — are calling for others to join them in synchronized action.

Last week, Unite said that 1,900 workers at Britain’s biggest container port Felixstowe will strike for eight days starting September 27 over pay for the second time in as many months. The walkout will overlap with strike action by hundreds of dockworkers at the Port of Liverpool, another key UK trade hub.
In the United States, too, workers are unhappy. Last week, the country narrowly averted a rail strike by more than 50,000 workers after unions and railroad companies came to a tentative deal over pay. The strike had threatened to cripple supply chains and push prices higher for many goods.