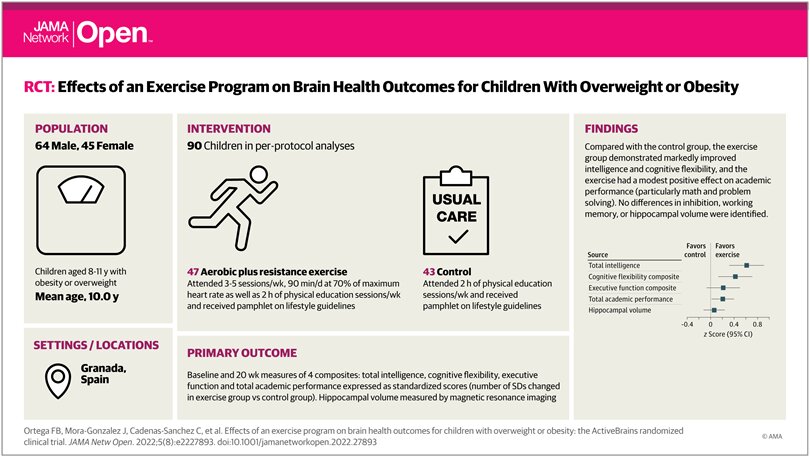 Is it possible to make humans smarter? There has been a traditional belief that intelligence is a characteristically stable trait; however, in recent years this conception has begun to change. Intelligence may be more modifiable than previously thought. While there are well-known benefits of regular physical exercise on physical, mental and cognitive health for people of any age, there was no conclusive evidence confirming whether regular physical exercise could improve people’s intelligence to date.

This work, published in JAMA Network Open this week, has demonstrated that physical exercise practiced regularly for about six months improves total intelligence, especially crystallized intelligence, which is the kind of intelligence associated with verbal vocabulary and wisdom acquired throughout life in a school context and beyond.

In addition, the exercise program significantly improved cognitive flexibility, which is a person’s mental ability to adapt to changing tasks or rules, maintain multiple concepts simultaneously and shift attention between different tasks/rules. It is important to note that the exercise program also improved overall academic performance, with mathematics and problem solving receiving the greatest benefit.

“From these findings, we extract an important take-home message for mothers and fathers: If your children do not perform well academically, do not punish them … or withdraw them from an after-school sports activity, do just the opposite,” says Francisco Ortega, Professor at the University of Granada and principal investigator for the study.

“We need to try to ensure a minimum of daily physical exercise, ideally 60 minutes per day of moderate-intensity aerobic physical activity, including at least three days a week of high-intensity physical activity and also activities that stimulate muscle and bone strengthening as recommended by the World Health Organization (WHO),” says the UGR Professor.

Overweight and obesity are a major health problem in the developed and developing world, being especially worrying in Spain, one of the leading countries in the ranking of overweight/obesity levels in Europe with one in three children presenting this condition. Obesity has negative effects on general health and, more recently, it has also been observed that it has effects at the cognitive and brain level.

“The present study has important implications for this population exposed to increased risks,” says José Mora, Associate Professor from the Department of Physical Education and Sports of the University of Granada. “This study shows that physical exercise is an effective tool to counteract the negative effects of obesity at a cognitive and academic level.”

Finally, the researchers say that the type of physical exercise performed in this study is transferable to the school environment. The exercise program was based on group games and without advanced equipment; it involved running on an outdoor court and children doing strength work with their own body weight or their partners’ body weight. All this was performed at a relatively high intensity, with the average intensity of the full session being around 70% of the maximum heart rate of the children, who exercised an average of three sessions per week of 90 minutes each, which would add 4.5 hours of exercise weekly.

“If we could increase the number of hours of physical education up to one hour daily, as is already done in other European countries and is being demanded in Spain, we could improve the physical and mental health of children and, as this study demonstrates, also the intelligence, cognitive and academic performance,” says Francisco Ortega.

Why don’t children with obesity benefit instantly from exercise?