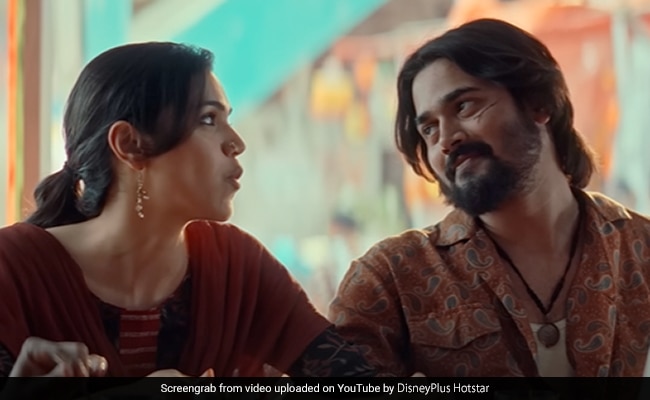 In Taaza Khabar, popular YouTuber Bhuvan Bam’s first web show, life takes unexpected turns for a Mumbai chawl-dweller who manages a pay- and-use public lavatory. A good deed and a resultant miracle give the young man the power to see the immediate future and manipulate his destiny and that of the woman he loves. The series itself could have done with more magic.

The six-episode Hotstar Specials show directed by Himank Gaur, who also helmed Bhuvan Bam’s YouTube series Dhindora, is a comedy-drama that struggles to rise above a hackneyed story involving a poor boy, Vasant “Vasya” Gawde, who seeks a better life for himself, his mother, his beloved and his friends.

A prostitute in love and a gangster with political ambitions are other key figures in the show. The two characters impact the life of the protagonist in ways so obvious that the possibility of any major surprises sneaking into the love-and-lust triangle is very, very distant.

The central conceit of the show may be unusual but, in terms of the characters and the plot details, Taaza Khabar is as stale as yesterday’s news. It has little that could be described as fresh off the oven. The hero makes a killing by betting on cricket matches whose result he is aware of in advance, piles up an obscene amount of wealth and then, unsurprisingly, realises that there is more to life than money.

The screenplay by Hussain Dalal and Abbas Dalal – it hinges on the fact that the protagonist is privy to events that haven’t occurred yet and the advantage that he derives from the clairvoyance that he is endowed with – is thin, laboured and without an iota of genuine insight into what a man stuck in a rut should be chasing.

Taaza Khabar, produced by Bam’s own outfit, is a rags-to-riches story crammed with facile ruminations on the difference between jadoo (magic) and chamatkar (miracle), dhokha (fraud) and yakeen (belief), shraap (curse) and vardaan (blessing) and kismat and karma. The series even as a character named Kismat(Mahesh Manjrekar in a cameo), who preens that he runs a “jugaad ka supermarket“.

It takes Vasya six episodes of roughly 30 minutes each to gather the wisdom he needs but at the end of the arc the audience is none the wiser. The trouble is that all that the series delivers is a bunch of half-baked homilies that never hit home.

Lead actor and producer Bhuvan Bam plunges into the material with all the enthusiasm at his command but nothing that he and the scriptwriters can muster up is enough to offset the deleterious effect of a contrived storyline devoid of genuine inspiration and novelty.

Playing a man with a god complex, a guy who overreaches, finds heady material success and then runs into the flip side of wealth and fame, Bam struts around like an old school, past-his-prime matinee idol who has no inkling that his days are no longer as bright as they once were.

At one point, the woman in Vasya’s life reminds that he can see the future but cannot actually change it. At another, she asks him: “Kya kar raha hai bachche ki tarah?” Exactly our question. The man prances around like a boy in a candy store.

The portrait of privation and serendipity is painted with broad strokes that leave little room for the finer lines that define human relationships and twists of fate to emerge and guide the story towards greater depth. The hero’s social standing isn’t explored beyond the basic level of the information that reveals his humble origins.

His identity as a sanitation worker is merely alluded to occasionally and never made an integral part of the plot. Vasya’s mother (Atisha Naik) has had a very rough life. She works as a maidservant in the home of a wealthy man and her alcoholic, abusive husband (Vijay Nikam) does not make life any easier for her. She is the reason why Vasant Gawde is in a hurry to teach the world a lesson.

It is both baffling and understandable that a financially and socially oppressed man is turned into a character whose only aim in life is to mimic the likes of the rich, slimy employer who humiliates his mother. You can fight wealth only with more wealth – even if it is accumulated through means that are palpably questionable – and empowerment can flow only from acts of subterfuge is what Taaza Khabar is bent upon asserting.

One thing that Taaza Khabar probably gets somewhat right is the belief that only a miracle can help a man like Vasant Gawde climb out of the hole that life has condemned him to.

Taaza Khabar has a bad guy, too. But he is such a weak, sketchy character that he comes across as a boy who has been robbed of his favourite toy. He cannot stop sulking. He is more a churlish spoilsport than a toughened criminal capable of being genuinely menacing.

The fey villain of the series sums up it all up – the yawning gap between intention and execution, and between desire and disposition, is unbridgeable. Worse, the girl he lusts after is allowed no agency of her own. She is pushed around until another man acquires the wherewithal to try and rescue her.

The principal members of the cast, including Shriya Pilgaonkar as sex worker Madhu, Shilpa Shukla as the brothel madam Reshma and J.D. Chakravarthy as the politically powerful hoodlum Atul Shetty, go through the motions rather competently without ever coming anywhere near livening up a dreary show that pans out along totally predictable lines.

Prathamesh Parab plays the hero’s boyhood chum Peter, Deven Bhojani is bakery owner Mehboob and Nitya Mathur is cast as the restaurateur’s daughter Shazia, who has a head for numbers and is of immense help when Vasya calculates his betting moves. This trio of actors is responsible for a few of the more effective moments.

Expect no magic in Taaza Khabar. It is a desultory affair that bets on fusty ingredients that do not possess a shred of originality.