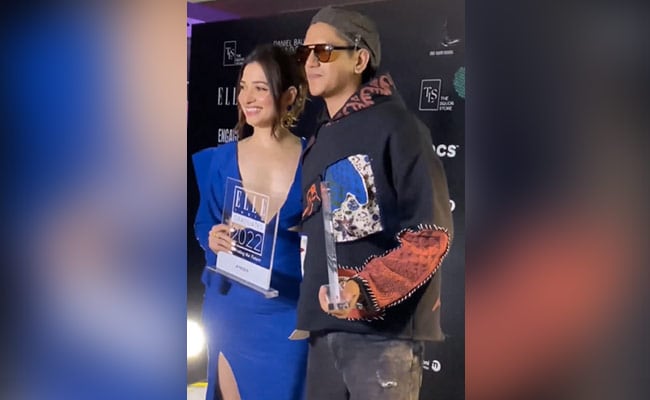 Tamannaah Bhatia and Vijay Varma were pictured at an event in Mumbai.

New Delhi: Tamannaah Bhatia and Vijay Varma are creating a heavy buzz on the Internet owing to their rumoured relationship. On Sunday, the duo were spotted together at an award show, Elle Graduates 2023, in Mumbai. Vijay not just photobombed Tamannaah’s photo session but also posed with her. It happened so, Tamannaah was posing with her trophy when Vijay entered the frame and walked past the actress smiling. On noticing him, a paparazzo requested the Darlings actor for a picture with the actress. Well, Vijay obliged, and they happily posed for the shutterbugs with their trophies.

Tamannaah Bhatia looked beautiful in a vibrant blue cutout dress, while Vijay kept it simple in a colourful jacket and black jeans. To accentuate his look, he added a stylish cap. Check out more pictures below:

Sharvari Wagh happily posed with Tamannah Bhatia at an event.

Coming back to Tamannaah and Vijay Varma, a video went viral on the Internet claiming both the actors spent the New Year holiday together in Goa. In a viral video, they seem to be hugging and dancing at a party.

Take a look at the viral video below:

Tamannaah Bhatia is one of the established stars in the South film industry. She is known for her performances in Baahubali, Happy Days,  Kalloori, Bengal Tiger and others.

On the other hand, Vijay Varma made his debut in Bollywood with the 2012 film Chittagong but rose to fame with his role in Pink. Since then, he has acted in several critically acclaimed roles, such as Gully Boy, Darlings, Mirzapur, and others.