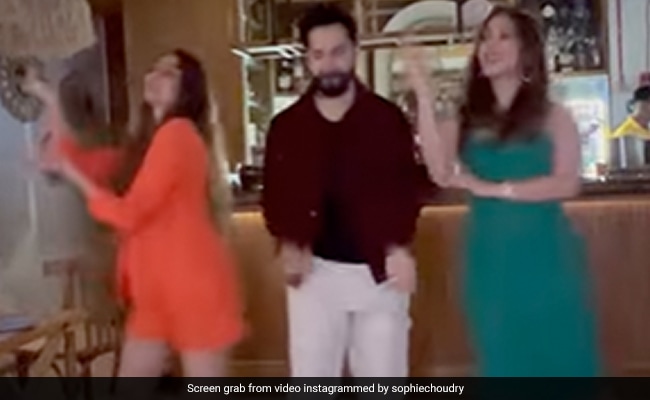 The success bash of Sophie Choudry’s new song Gori Hai was all about fun, “bloopers, bumps” and nailing the hook step. The actress-singer hosted a party for her friends from the film fraternity on Tuesday night. Varun Dhawan, Dia Mirza, Neha Dhupia, Angad Bedi, Anusha Dandekar and Manish Malhotra were among the many who attended the event in Bandra. After sharing stunning pictures of herself with the guests, Sophie left her fans in splits on Thursday by treating them to a blooper from the party.  The video features Varun Dhawan, who launched the song via Instagram Live last month. The actor is trying to match steps with Anusha Dandekar and Sophie Choudry. At the end of the clip, Varun can be seen hilariously bumping into Anusha and walking towards the camera.

In her previous post, Sophie Choudry shared a set of photos of those who added glitter to her party. The first image features Sophie with Varun Dhawan, followed by Dia Mirza, Manish Malhotra and others. “Celebrated the success of Gori Hai and what an amazing night it was. So grateful to be surrounded by the bestest people. My Varun Dhawan, you need a whole post dedicated to how special you are,” wrote Sophie and thanked all her friends for making it a night to remember.

Gori Hai is a remake of the classic song Gori Hai Kalaiyaan from the 1990 film Aaj Ka Arjun.

It has been recreated by Vikram Montrose and directed by Ajay and Lovel Arora.