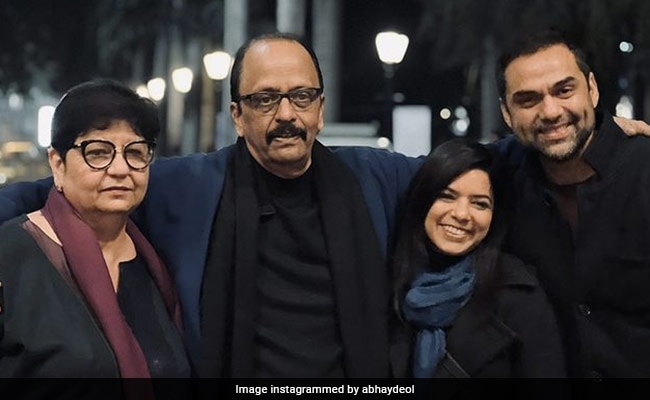 Abhay Deol is basking in all the praise coming his way for his performance in the Netflix series Trial By Fire. The gut-wrenching series is based on the 1997 Uphaar Cinema fire tragedy and features Abhay opposite Rajshri Deshpande. Abhay and Rajshri are playing real-life couple Neelam and Shekhar Krishnamoorthy, who lost their children in the fire accident. The show traces the journey of the couple’s fight for justice and is based on the couple’s book Trial by Fire: The Tragic Tale of the Uphaar Fire Tragedy. Now, Abhay Deol has shared a photo of Rajshri and him alongside Neelam and Shekhar Krishnamoorthy on Instagram. In the caption, he said: “The real Krishnamoorthys with the reel Krishnamoorthys. Neelam and Shekhar. #heros #truestory #reellife #reallife #trialbyfire #netflix.”

The story of loss and devastation has touched a chord with viewers, with Trial By Fire receiving overwhelmingly positive reviews. The show trains its lens on the aftermath of the tragedy that occurred 26 years ago and the court proceedings that followed. NDTV’s Saibal Chatterjee wrote about the show, “The seven-episode series captures, subtly and piercingly, the trauma of a tough and tenacious Delhi couple who lost their two children in the Uphaar cinema fire on June 13, 1997 and then, with the support of lawyers and the relatives of the others who died that fateful afternoon, fought tooth and nail to bring those responsible for the tragedy to book. The show trains the spotlight on the protracted and arduous war that Neelam and Shekhar Krishnamoorthy have waged to ensure that the real estate tycoons who owned the cinema hall are punished for their cavalier disregard for safety norms.”

Abhay Deol also shared a post celebrating the fact that the show was trending at the No.1 slot in India, on the day of the release. “No.1 on the first day of streaming! Humbled, grateful, speechless,” Abhay Deol said.

Pakistan singer Ali Sethi replied to the post with fire emojis. Actress Tara Sharma Saluja said: “Woohoo! And so well deserved. I howled as you know. So moved by this heartwarming series and all your performances! Our prayers and love to the real families too.”

Speaking about playing Neelam Krishnamoorthy, Rajshri Deshpande said, “As an actor, I’m always looking for roles that challenge me, inspire me, move me. Getting to play Neelam was all of that. And a lot more. I never realised when Neelam’s life became more than a textbook. It became my North Star. Her trials and tribulations didn’t put her down. In fact, they made her stronger. She and Shekhar woke up every day to step out and continue the fight. For years.”

She added, “As an actor, that kind of determination not only enriches you as an actor, but inspires you on a very personal level. All I have is immense gratitude for getting a chance to play this fighter woman. This role taught me a lot about life and the way to live it right. If that is not overwhelming, I don’t know what is. Salute to #neelamkrishnamoorthy #shekharkrishnamoorthy and all the #AVUT team.“

You can watch the seven-episode show on Netflix.