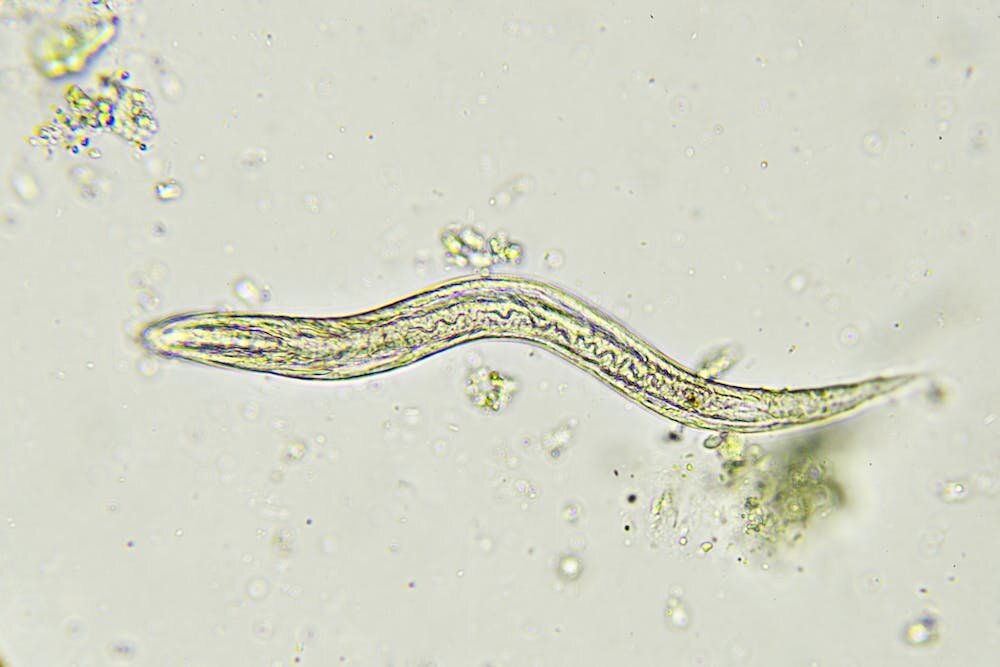 As a parent, it might feel like you are constantly giving your children worm treatments—usually in the form of chocolate or sweetened chewable tablets.

In fact, most kids in Australia (or any other rich country) get very few worms compared to kids in places where poor hygiene practices make all sorts of worms common. But there is one species of worm so common and so tied to humanity, it can defeat even our most comprehensive hygiene standards.

Young children are really good at transmitting infection with these tiny pests. And they can get really cranky in the process.

Pinworms are an ancient species and have been found in fossilized 230-million-year-old proto mammalian poo. The closest relatives of the pinworm humans get are found in our closest cousins, the apes. Our pinworms are thought to have evolved with us. The oldest pinworm eggs from a human host were found in some 10,000-year-old dried human stools discovered in a Colorado cave. So, pinworms are very well adapted to living in and with humans.

Pinworm infection is present in between 5% and up to 50% of primary school children, though easy access to good treatments and school education programs have reduced levels over the last 20 to 30 years.

These worms are white and thread-like with females measuring up to 13 milimeters long. Males are less than half that size. They live in humans worldwide, mostly in children between four and 11 years old. They can also infect adults though usually with less negative effects.

Pinworms have been associated with some other conditions including types of appendicitis, vaginitis and urethral infections but these are not common outcomes.

The problem isn’t usually the adult worms, which live in the caecum (a pouch where the small and large intestines meet) for up to two months.

When the female wriggles out of the gut to lay her eggs around the anus—usually early in the morning—it can cause irritation. But the biggest issue is caused by eggs that are stuck onto the perianal skin with an irritating glue. This is what causes even more irritation and itching.

The worm’s life cycle actually depends on the child or adult scratching their bum. When the eggs are scratched off onto the hands or under the nails they can be transferred to other children at home or at school, or to adults. Most often they go to the scratching child’s mouth where they can be swallowed and start another infection, known as an “auto infection.”

The eggs are so light they can infest pajamas, bed clothes, the bedroom and in long term infections they are found in house dust (though studies suggest these eggs are not viable beyond one week).

Pinworm eggs are literally a pain. They can make a child scratch so much they cause skin inflammation called puritis. This becomes very painful and can result in lost sleep and a very tired and cranky child.

So that’s what’s up with them …

There are many reasons for a child to be tired and cranky. But if your primary school age child is behaving this way and has an itchy bum, pinworm may be the culprit.

Pinworm eggs are so small they can’t be seen individually but the females lay more than 10,000 in creamy colored clumps, which may be visible around the anus. The female is also visible when laying eggs, which means a check of your child’s bottom when they are itching intensely may be revealing. Otherwise a sticky tape swab of the skin next to the anus can be analyzed for eggs under a microscope. Your doctor can organize such a test.

Treatment is simple and easily obtained from the chemist. Most worming brands use the same drug, called mebendazole. Medication should be taken by each member of the family and the dose should be repeated two weeks later to ensure control of pinworm in the home. Contaminated clothing and bedding should be washed in hot water.

Other methods of preventing infection include regularly washing hands and scrubbing finger nails. A shower with a good bum wash is also a good idea, especially in the morning. Trying to stop children sucking their fingers and thumbs, sucking toys or other items that might carry eggs is also suggested, though not easily achieved.

Although we have better control of pinworms in the 21st century, they are still with us and we are very unlikely to be able to eradicate such a well-adapted and intimately entwined parasite.

What are parasites and how do they make us sick?

Provided by
The Conversation


This article is republished from The Conversation under a Creative Commons license. Read the original article.